The soft and fluffy texture of pancakes is what makes them such a popular breakfast in many parts of the world. Then there are the French crepes that are equally admired in some parts of the world. While crepes are thinner, pancakes are generally considered thick. However, there is a dish that the Swedish have devised so that you never have to choose between the two of them. Called Pannkakor, these are considered Swedish pancakes. Although the name pancake has been given to this dish, the taste and texture is closer to a French crepe than a pancake. Despite this, the name given is a Swedish word which translates to pancakes.

Also Read: The Difference Between A Pancake And A Crepe

Around the world, pancakes are eaten in a variety of ways. Some are sweet, with fruit and cream toppings, while others are served with ham, bacon and sausages. Interestingly, both these accompaniments work well for a pancake. However, that’s not the case with the Swedish Pannkakor. They are a sweet treat that is commonly eaten for breakfast. Not much is known about the origins and creators of this heavenly dish but it is believed that these pancakes have existed in Swedish cuisine since the 1500s. To substantiate the claim, it is said that there are several proverbs and parables from that time that mention pancakes.

It is quite fascinating to note that pancakes were once considered a luxurious treat because of the ingredients that go into its making. But today, these have found a place in every Swedish breakfast. There are several types of pancakes that you’ll find in Swedish cuisine but the most prominent of them is the Pannkakor. What is so special about this pancake, you ask? Well, these pancakes aren’t anything like the regular ones. 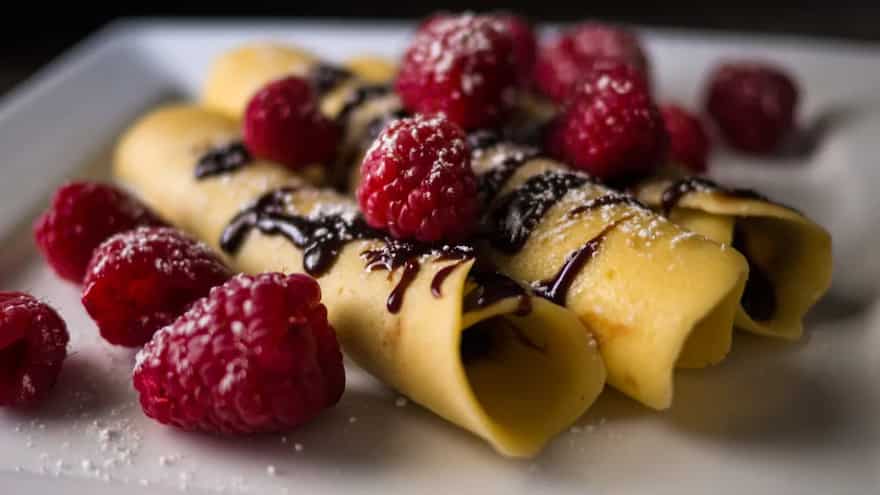 They are thinner than regular pancakes, making them closer to French crepes. However, they aren’t as thin as crepes too so they are considered to be a cross between a pancake and a crepe. The ingredients that go into the making of a Swedish pancake also differ slightly from other pancakes. Instead of more flour, less eggs, and butter, their proportions follow more eggs, milk, sugar, and less flour formula. This makes the batter thinner and the resulting pancakes airier, lighter, and fluffier.

Since they aren’t as thick as traditional pancakes, they are usually folded like crepes. Their batter also doesn’t include any leavening agent like baking powder in the mix. The serving style of Swedish pancakes also differs from crepes slightly. They are traditionally rolled and folded like a crepe but usually eaten with a yellow split-pea soup on the side. For toppings, the Pannkakor is filled with lingonberry, yoghurt, other fresh fruits, and fresh cream. This lends the pancakes a sweet taste and makes them a decadent breakfast for mornings.

There are some other types of pancakes in Swedish fare too. Some platters are served as a fried festive treat but are usually smaller in size and have less sugar than the classic Swedish pancakes. Apart from these mini-pancakes, there is another type of pancake that is made with grated potatoes and is a winter favourite.

Aktori: The Pahari Pancakes That You Can Sample For Breakfast

From Appam To Obbattu: 8 Pancakes From Around India

How About Some Badam Milk, Coconut Panna Cotta, And Banana Pancakes To Beat The Summer Heat