Sannata Raita: Is There Something Spooky About This Curd Dish?

While there are many raitas in the Indian fare, there is something about the Sannata Raita that raises eyebrows

Paired with most meals as a side dish or added to beverages to make some thick and creamy concoctions, dahi aka curd is a usual suspect at the lunch table in several North Indian households. One interesting dish that can be prepared using dahi is raita. To add an element of flavour and nutrition, vegetables and sometimes, even fruits are mixed with dahi to form raita. However, you may have not yet heard about Sannata Raita. One of the many lost recipes of Indian fare, the Sannata Raita has an eerie feeling attached to its name.

The use of the word Sannata lends a spooky connotation to the name of the dish since it means silence in Hindi. Why is it called so, you ask? Well, once someone tastes this raita, they might an answer to this question. The raita is believed to have been named so due to the sour flavour of the curd dish. It is said that whenever someone would eat this raita, they would go silent for a few minutes as the brain and taste buds would take time to process the sourness of the dish.

Now, one would wonder what contributes to the sour flavour of this raita. The Sannata Raita is made with asafoetida, cumin seeds, coriander, mint and carom seeds. Rock salt and black salt are also sprinkled in the raita after which it is combined with curd. The silenced evoked by the strong flavours of dish is believed to make a person pause for a few seconds before regaining their taste. Since the name resonates with an eerie feeling, often times, people mistake the raita to be some kind of a spooky dish. 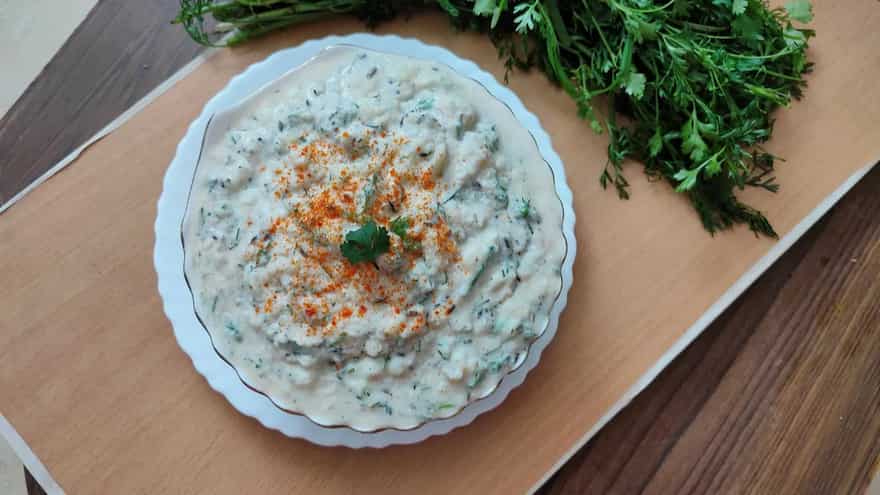 Instead, the Sannata Raita comes with loads of health benefits. Due to the use of spices and coolness of curd, it is also believed that the raita solves most of the digestive problems related to the stomach. That’s another reason why the dish is named so. Dahi is a probiotic and is always recommended to be eaten in summers in order to keep the stomach cool and provide good bacteria for the gut. The medicinal properties of spices like cumin, carom and asafoetida are no stranger to us. These help in improving digestion, while resolving any digestion-related troubles.

While curd helps in cooling the inner lining of the stomach, the spices used in making the raita have been well-accepted in Ayurveda too for being good for digestion. Another interesting fact about this raita is that it is made with three parts water and one part curd. It is whipped together after which the spices are added and the raita is ready. The consistency of the raita is what makes it stand apart from the other raitas. From keeping you cool and relaxed during summers to silencing all the irritable bowel movements, the Sannata Raita is a food hack worth trying.

This 5-minute recipe of bathua raita is a winter show stealer!

Types Of Vegetable Raita For Lunch