Well, it’s not a secret that Malaika loves south Indian food, as she has revealed so in many of her past social media posts. If you follow Malaika Arora on social media, you would know how she is one of the biggest foodies in Bollywood, and enjoys a balance of healthy and indulgent delicacies whenever possible. Known for her fitness routine and fashion sense, Malaika has a following of over 15 million on Instagram, where she shares snippets from her daily life with her social media family, and doesn’t leave any moment uncaptured even while on her vacations.

Recently back from a vacation in Paris with actor Arjun Kapoor to celebrate his birthday, the couple had quite a foodie trip to the city of love. Didn’t we tell you about how Malaika’s search for the best French Toast ended at an eatery in Paris? Read more about it here. Now in Mumbai, Malaika is back with her food shenanigans, and has just revealed the perfect snack for the rainy weather in the city. Can you guess what it could be?

Well, it is none other than the south Indian crispy snack murukku, which Malaika finds to be ‘perfect for this weather.’ Taking to her Instagram Stories, Malaika shared a picture of what seems to be just out of the pan, freshly fried murukkus by Malaika in her own kitchen, and wrote ‘homemade murukkus perfect for this weather’ along with a heart emoji. “Some coming your way Gaurav Kapoor,” she added further. The fact the Murukkus were homemade made them seem even more delicious! Take a look: 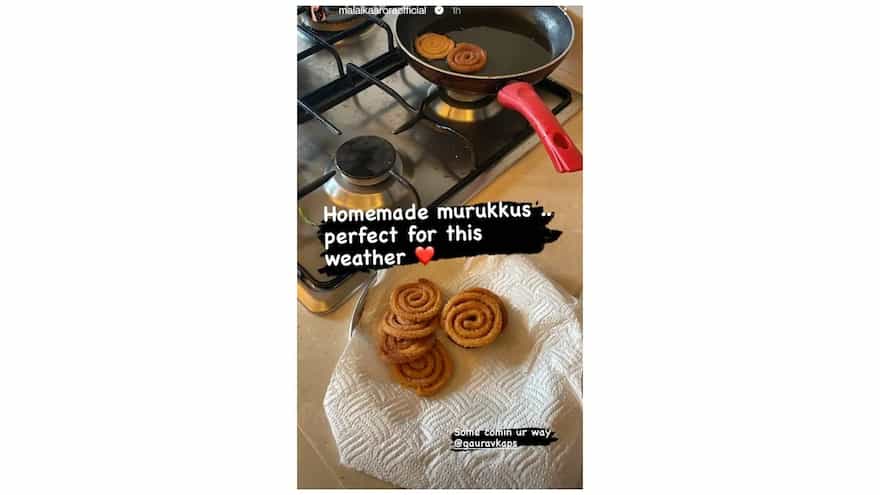 And if you thought that was all, wait till you see her next story. In the very next photo she shared, we could see a hearty Avial curry, which Malaika relished. “Avial for the win,” she wrote in the caption. There was also what seemed to be a South Indian-style potato salad in frame. Take a look: 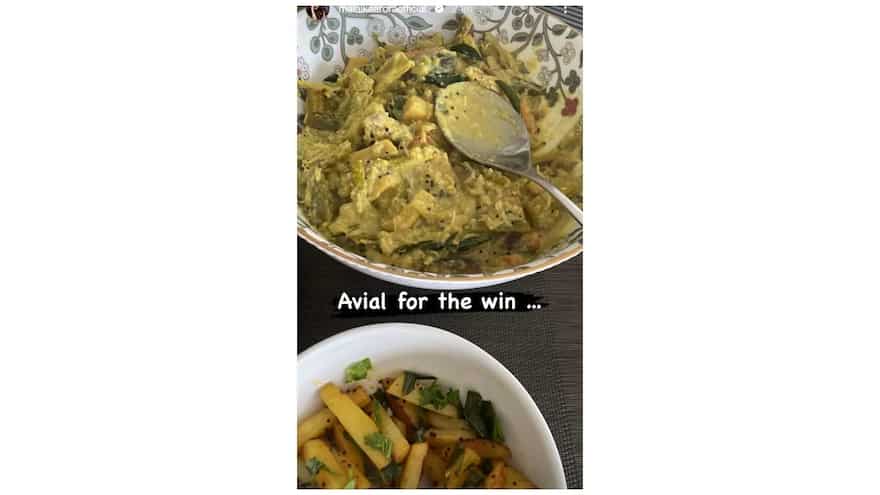 Well, it’s not a secret that Malaika loves south Indian food, as she has revealed so in many of her past social media posts. Be it her love for her mother’s fish curry or the Onam feast at her home, south Indian cuisine seems to be Malaika’s comfort food. In fact, just recently Malaika was seen enjoying a sumptuous spread of south Indian food including vada, sambar, and chutney, and the sight was sure to make foodies slurp. Well, we are completely in awe of Malaika’s food diaries and are craving some South Indian too, and if that’s the case with you too, we’ve got a recipe of murukku right here, and one for avial here too.

Malaika Arora Is Hooked To This Healthy Snack, Can You Guess?