Makhan Mishri: The Tale Behind The Janmashtami Special

Lord Krishna knew the importance of having a sweet tooth, why not try his favourite treat. So much of tradition has its roots in religion, and food is no different. So many iconic parts of India’s food culture are handed down through oral tradition and a love of stories. On Janmashtami, many tales of Lord Krisha are told, but there are few that capture the essence of his free spirit and love of life better than the tale behind the sweet and creamy Makhan Mishri.

Each year on Janmashtami, devotees of Lord Krishna come together in a celebration of his life on earth. The belief is that Devaki and Vasudev were the chosen parents of the eighth avatar of Vishnu so he could come and rid the people of Mathura from the evil rule of King Kansa. In accordance with his avatar, Lord Krishna was born on the eighth day – or Ashtami – of the Hindu holy month Shravana.

There was a prophecy that the eighth son of Devaki and Vasudev was to be the deliverance of Mathura from Kansa, and in order to prevent that, the evil King had killed all of their previous children. So when Krishna was born, they spirited him away to Yashoda and Nanda in Vrindavan to keep him safe.

He was a playful child, fond of sweets and known for his shenanigans. White butter (makhan) was one of his favourite foods and it’s said that as a treat, Yashoda would mix the butter with sugar and feed Lord Krishna, much to his glee. But he became so fond of it that he ran riot across the village stealing butter as soon as it was churned. A dismayed Yashoda then tied him to a pole to quell his mischief.

Also Read: Khoya Peda: This Janmashtami Sweet Is So Easy To Make That You Can Ditch Your Halwai This Year

This earned him the name ‘Makhan Chor’ (butter thief) and as part of Janmashtami celebrations in his honour devotees recreate the simple but delicious dish of Makhan Mishri to offer up in homage to Lord Krishna to appease him once again. The dish is also a prime part of the Chappan Bhog – a list of 56 items which are distributed among followers when they break their fast.

On the occasion of Janmashtami, try your hand at this quick and easy dish and you could also revel in the happiness of the beloved ‘Makhan Chor’. 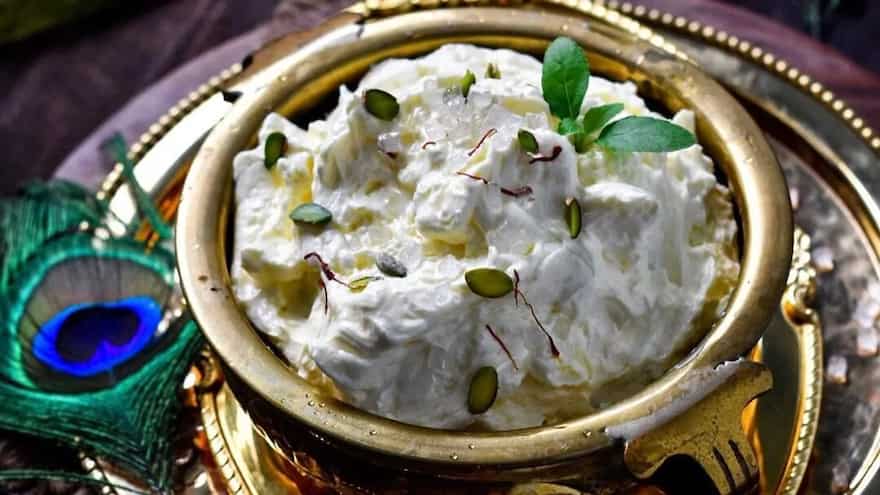 Janmashtami Special: 5 Irresistible Sweets You Can Make For Krishna Ji