What's The Meaning Behind The Janmashtami Chappan Bhog Thali

56 individual dishes are offered to Lord Krishna at this festival, but why 56? Indian festivals are always a celebration of joy, colour, light and of course food. Janmashtami is no different. As the festival approaches people are gearing up to offer Lord Krishna a true feast in exchange for his blessings and goodwill. The way they do that is through the Chappan Bhog. A special offering of 56 items that are offered to the Lord every Janmashtami. The day marks the birth anniversary of Lord Vishnu in his eighth avatar on Earth. It is believed that Lord Vishnu comes to our aid whenever we as a species are plagued by sadness or evil and he is required to deliver us from that turmoil. Lord Krisha as the eighth avatar was birthed to rid the people of Mathura from the evil rule of King Kansa and his life on Earth has inspired many stories which shape the rituals celebrated during the festival, including the story behind the Chappan Bhog.

Also Read: Janmashtami 2022: Celebrate The Day With This Vegetarian Menu 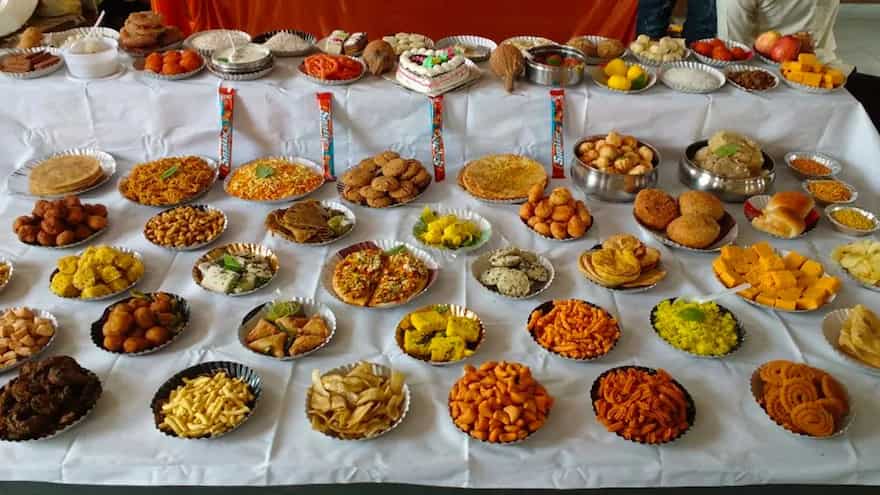 As he grew up hidden away in the care of Yashoda and Nanda in Vrindavan, Lord Krishna was said to be a lover of life, mischief and especially food eating a standard of 8 meals a day. His trickster nature was notorious but inspired affection from all who got to know him. In Vrindavan, farmers would offer a prasad of rich foods to Lord Indra, the god of rain to appease him for good weather and bountiful harvests. Young Lord Krishna believed it was unfair that the farmers should share their hard-earned food with Lord Indra, and told them to stop offering such rich meals.

Lord Indra was irate when he didn’t receive his usual luxurious feast and sent torrential rains to flood Vrindavan. To save the people, Lord Krishna gathered all the people of Vrindavan under Govardhan Parvat (Govardhan mountain) and lifted up the mountain on his little finger so the villagers could shelter underneath. For seven days he stood holding the mountain without sleeping or eating until the floods abated. So on the seventh day when he delivered everyone to safety, the villagers cooked him a grand feast of 56 dishes – one for every meal he missed that week – as a sign of their gratitude. 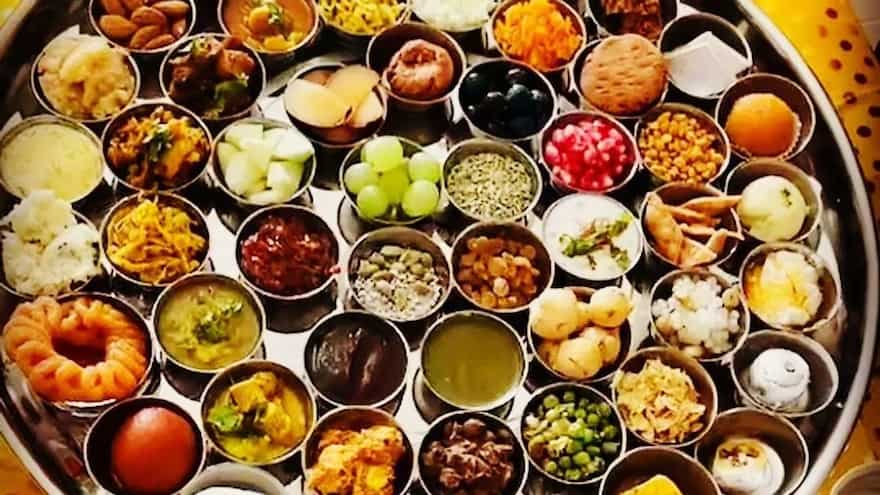 The Chappan Bhog typically comprises dishes that were said to be Lord Krishna’s favourites including a variety of cereals, dry fruits, vegetable dishes, savouries, chutneys and pickles. Lord Krishna was particularly fond of makhan (white butter) and Indian sweets which also feature heavily on the menu. There is also a larger philosophy at work that dates back to ancient ayurvedic beliefs.

The five fingers represent five rasas – sweet, sour, salty, spicy and savoury – and when cooking with the hands, the rasas are transferred to the food. When preparing the Chappan Bhog for Lord Krishna, it is believed the people cooking become even more sacred as they offer part of themselves to the gods. The Chappan Bhog is a way of connecting with a higher power and offering up gratitude and joy in the form of delicious, simple food, just the way that Lord Krishna would have wanted.