This vegetarian mutton curry is cooked sans onions and garlic.

While the words vegetarian and mutton curry in the same sentence might sound odd to you, it is a crowd-pleaser at Durga Puja.

It is quite interesting to see that while half of the country is celebrating Navratri and keeping fasts, the other half is welcoming the nine-day festival with lavish feasts during Durga Puja. No matter how the festival commences, pomp and show is guaranteed across the country for these particular days. Sadly, the pandemic situation has restricted the access to pandals and even the bhog is being packed and sent over to Bengali houses in boxes this year in Delhi. The bhog is a delectable affair, comprising of a range of vegetarian dishes. While the Ashtami bhog comprises of labra, alur dom and many other vegetarian dishes, the khichuri is the core of the feast.

On the ninth day of the Durga Puja celebrations, non-vegetarian dishes make their way into the feast. Kosha mangsho and fish are popular items on the menu. Now, let’s jog our memory and recall how we had read about the rituals of animal sacrifice in Hindu customs. That is prevalent during the Durga Puja celebrations in different parts of the country. One such special tradition is that of the vegetarian mutton curry. Curious to know why is it called so? Let’s find out.

How Is It A Vegetarian Mutton Curry?

According to yogic traditions, foods are classified as sattvic, tamasic and rajasic based on their nutritional profile and effect on the body. While the former is considered to be the best form of diet which offers a balance of everything, the latter are believed to drain you of your energy and activate a high level of stimulation respectively.

On the basis of this classification, onion and garlic are believed to be tamasic and therefore, deemed unfit for consumption during this festive period. Since Bengalis are hard-core non-vegetarians and animal sacrifice is an intrinsic part of these celebrations, they have devised a vegetarian mutton curry. Traditionally called Niramish Mangsho, where niramish refers to vegetarian, the mutton curry is cooked without the use of onions and garlic.

Considered as a mahaproshad for the deities, the mutton curry is offered to the Goddess before being served to the worshippers. The roots of this ritual lie in the Shakti peeths, consisting of pilgrim places where Goddess Shakti is worshipped. The practice of offering animals to the god dates back to the early A.D, when the tribal communities followed this and gradually, the ritual trickled down to the Shakti peeths with the belief that the Goddess needed blood and meat to tranquilize herself.

There are speculations about the origins of this dish from Assam, wherein it is said that the priests who settled in the state with the royal families, brought the vegetarian mutton curry with them. Here, anything from buffalo to goat and duck can be considered a part of the sacrificial duty but the hierarchy of caste defines what will be served to whom. For instance, goat meat is served to Brahmins and upper caste members associated with the Dangar temple in Assam while the tribals are fed with buffalo meat.

A similar practice resonates in Odisha too, where the meat of an old goat is cooked with vegetables and spices like coriander, cumin etc. Some other temples prepare it like Rogan Josh with mustard oil, chilli powder, bay leaves and more.

Whatever be the special technique and unique recipe of Niramish Mangsho, the fact remains that the tradition has seen various adaptions across the Indian sub-continent and holds a special position in terms of the Durga Puja celebrations.

Durga Puja 2021: 5 Foods From The Pandals You Can Make At Home 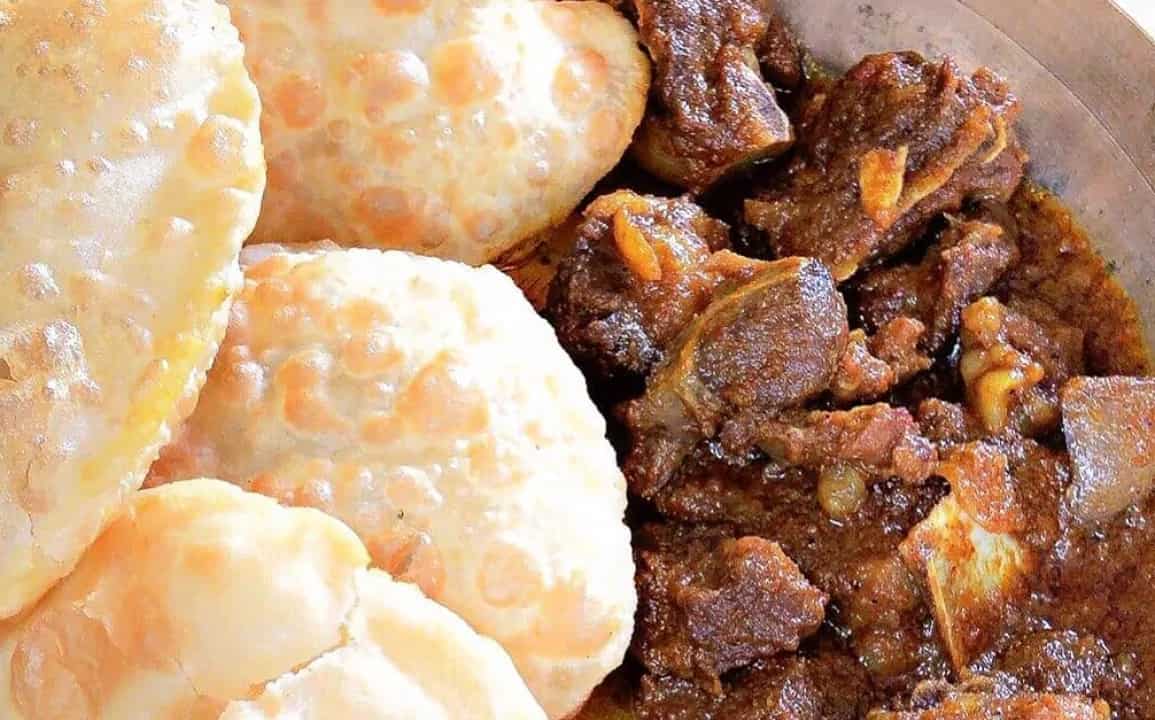 Durga Puja 2021: 5 Foods From The Pandals You Can Make At Home