The Tale of Ash Gourd In Durga Puja

The plain-looking and bland-tasting ash gourd rise to prominence during Durga Puja. It has its fascinating sagas A few laid-down dishes have been prepared during Durga Puja across the country. The majority of bhog or naivedyam recipes prepared at home share incredibly intimate tales. In many cases, they lack any Vedic connections. Others are based on writings emphasising the bhog's medicinal or agronomic function. In the trajectory of events, a few recipes are lost, and many have something to do with the sacrifice ceremonies. Once upon a time, this custom was a crucial component of Tantric and Aghora religions, as well as Mother Goddess veneration. When it comes to sacrificial offerings for the Devi, ash gourd or wax gourd is explicitly mentioned. The chalkumro, or ash gourd in Bengali, has been incorporated as a sacrificial alternative, solidifying its position in the bhog dish.

Also Read: How Did Khichri Or Khichuri Take Centrestage In Durga Pujo Bhog?

Bali or sacrifice has been believed as a symbol of invoking Shakti or power. Since the Goddess is an embodiment of Shakti, sacrifice was a part of it. There was a time it used to be the animal sacrifice. But over time, ash gourd replaced the fauna life as a symbolic sacrifice. This vegetable is also said to possess "Prana," a spiritual phrase that denotes life.

When Buddhism, Jainism, and later Vaishnava groups emerged in antiquity, animal sacrifice ceremonies came under attack. Instead, the practice of offering an ash gourd was adopted. One explanation is that it resembles an animal's torso in terms of shape. The sacrificial ash gourd is frequently pierced with four sticks for the legs and a smaller stick for the tail, in keeping with the symbolism. Over the exposed, wet flesh, vermilion is sprinkled, leaving a trail that resembles a bloodstain. 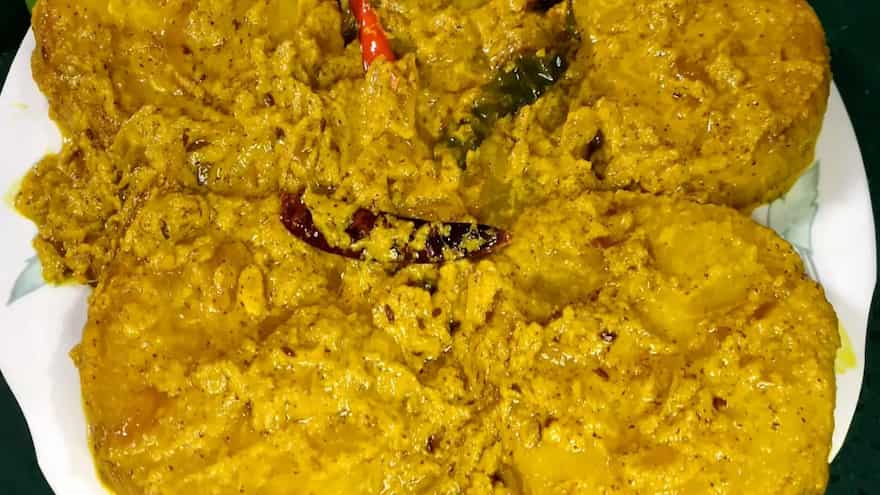 The sacrificial ash gourd is typically prepared for bhog during Durga pujo in Bengal using mustard paste and mustard oil. This deviance from the Vaishnava recommendation to prepare food in ghee may be the last vestige of the Shakta quality. It claims that the use of mustard protects women and wards off evil.

The Sanskrit name for this vegetable, Kusmanda, clarifies its importance to Vedic history. It is interchangeable with the Devi Kusmanda. According to legend, she is the universe's founder. The term, which literally translates as the small egg of energy, is a representation of the earliest atoms.  The use of kusmanda (ash gourd) in offerings or bhog is mentioned in the Pancharatra literature Ishwara Samhita. The scripture depicts an ash gourd prepared in hot ghee with crushed cumin and peppercorns. This is one of the first known ash gourd bhog recipes, indicating its importance in the development of Vaishnava thought. Perhaps, that's how Vaishnava replaced Shakta and Shaiva thoughts and became the foundation of Brahminical Hinduism. Numerous myths and legends surround the ash gourd. According to one, persons whose parents are still alive should not use a knife to slice a whole ash gourd. Ash gourds are shattered in Karnataka by first being thrown down from a height. This is how it is done on the ninth day of Dasara, the Ayudha Puja.

Ash gourd is one of the pranic vegetables with the maximum life energy. Maybe all these traits and the shape led to the sacrifice of an otherwise bland and unassuming ash gourd.