Sambhar or Sambar is a traditional South Indian vegetable-lentil stew made in a tamarind broth with spices, using minimal amount of oil. It is flavourful, hearty and nutritious to say the least. A delectable medley of different kinds of vegetables and aromatic spices, supplemented with tangy notes from the tamarind, and the comforting presence of lentils truly rounds off the dish, instigating the warmth and joy of home cooked meals. The dish is commonly made with toor dal or pigeon pea supplemented by brinjal or eggplant, onions, tomatoes, moringa or drumstick, pumpkin, okra or ladyfinger, and radishes. But in South Indian homes, every family has their unique way of making Sambhar, making use of whichever vegetable or lentil is at hand, that tastes equally flavoursome and toothy. Therefore, if it looks like a sambhar, smells like a sambhar, tastes like a sambhar, then guess what? It is a sambhar. There’s no hard and fast rule of making sambhar if you’re keeping the basic components of the dish intact and that opens up a world of signature sambhar dishes that nobody has tried before. So here are 5 variations of sambhar that one absolutely ought to try if they’re keen on calling themselves a lover of South Indian cuisine. The world is a crazy place, one minute you learn that sambhar is made with lentils and in the next you’re introduced to a sambhar that doesn’t use lentils at all. Yes, this quick and easy sambhar dish doesn’t involve the use of lentils or tamarind at all and comes together in a matter of minutes with minimal ingredients. The term ‘manjal’ means yellow in Tamil, and manjal sambhar draws its inspiration from the turmeric used in its preparation. Along with that we have roasted chickpea flour or besan, onions, garlic, sambhar spice mix, fennel seeds, mustard seeds, curry leaves and green chilies to make this tiffin sambhar as one would call it in the South, considering it is a makeshift sambhar that is almost indistinguishable from the real one. 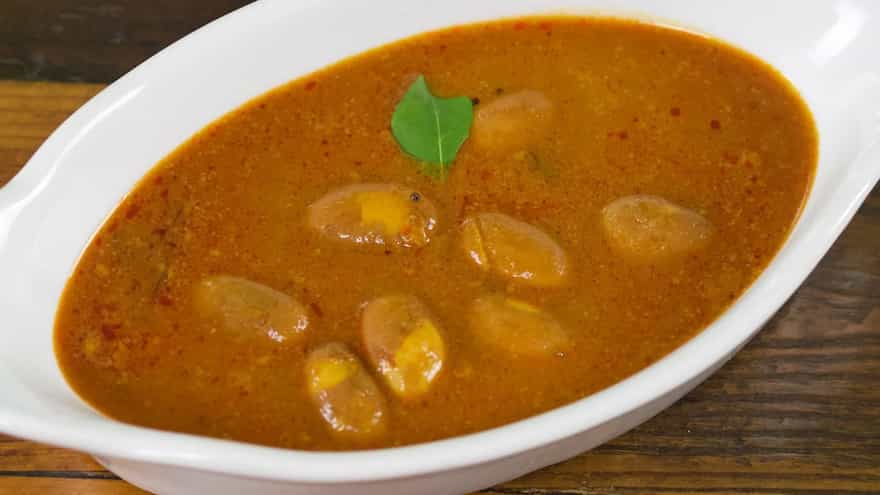 Jackfruits are a versatile fruit in Indian homes, leaving it’s prickly and sticky outer shell, it is a goldmine of flavours seeds and all. For the preparation of this sambhar, the jackfruit seeds are separated from the pulp and pressure cooked till softened. Then it is peeled, cut and added with toor dal and tamarind water along with a host of spices, cut green chillies and a substantial amount of jaggery, to make this truly mesmerizing sambhar that’ll make you go wow! Bitter gourd is a big no-no for some, although it finds its favour with a large number of Indians who don’t just approve of its bitterness, but enjoy the vegetable for it. This sambhar preparation calls for the use of bitter gourd that is steamed, along with a mix of black eyed peas and toor dal, and grated coconut to create something truly magical, something that you would keep coming back to, especially if you’re not a fan of bitter things. The bitterness from the gourd subsides in the creamy texture of the toor dal which dissolves into the dish, the viscosity from the added coconut and the bite from the beans along with the tanginess of the tamarind. This sambhar dish is well-rounded and not overly bitter and if you’re not convinced, try this for yourself and you won’t regret it. Move aside, tomato soup! Thakkali sambhar is where we go to get our fix of deliciously sour and tangy stews that are made all the more nutritious with the addition of drumsticks and lentils. Toor dal is used to this effect but really, any lentils you have in your pantry would work just fine. At first, the drumsticks are stewed with onions in a tamarind broth until softened, to which the tomato is added blended with grated coconut and spices. The boiled and mashed dal is added at last and simmered till everything is well incorporated. This sambhar is not overly sour or tangy but pleasantly balanced with the right amount of sweetness from the jaggery and grated coconut. And what more, but the drumsticks in the end, that soaks up all the flavours which upon chewing releases it all over again, making us chew on it even more till it can’t be chewed no more. 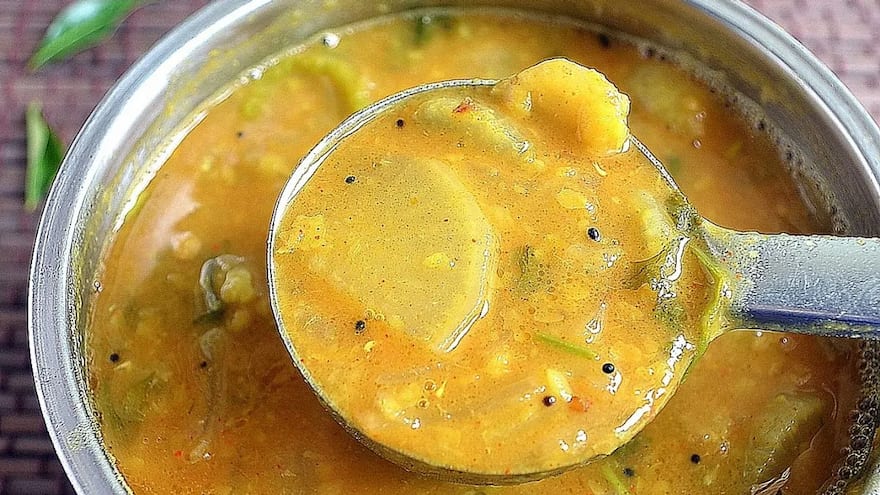 Red radishes are added to a regular sambhar but their presence is only felt in passing. This sambhar preparation calls for slow cooking the radish until completion with the toor dal and spices and adding a tadka in the end for extracting the maximum flavour. The shining light of this sambhar preparation is the radish, which is celebrated in the dish rather than made to mask its presence. No other vegetable is added to this extent and slow cooking this sambhar only makes it that much better, as the sambhar spices and the tamarind truly get the time to merge with the tough radishes and the flavours from the radish to infuse with the stew, making it a nutritious, healthy affair altogether. You can prepare it on the weekends or overnight and in the end, you will be greeted with a hearty sambhar without having to spend time hovering over the stovetop.

From Mimosa Muthaly To Mutton Sambhar, The Flavours If Pondicherry's Franco Tamil Cuisine