Leftover Sambhar? Here Are Some Dishes You Can Have With Sambhar For Dinner

Leftover Sambhar at home? Try these dishes that go well with sambhar and have a proper South Indian style dinner. South Indian cuisine is referred to the cuisines of Andhra Pradesh, Karnataka, Kerala, Tamil Nadu, and Telangana, as well as the union territories of Lakshadweep, Pondicherry, and the Andaman and Nicobar Islands. Sambar is a vegetable stew made with lentils, pigeon peas, and tamarind broth. It's popular in Sri Lankan and South Indian cuisines. The stew has become a popular addition to Burmese curries in Burmese cuisine. The earliest documented mention of sambar in literature, according to food historian K. T. Achaya, dates from the 17th century. Sambar is derived from the Tamil word champram. Sambhar is a heavenly mix of vegetables, dal, stew and all the South Indian spices. It is tangy, spicy, salty and has a thin consistency. Sambhar can be eaten with various dishes.

Here are some dishes that go well with Sambhar-

Idli or idly is a savoury rice cake from the Indian subcontinent that is popular in Southern India and Sri Lanka. Idlis are prepared by steaming a batter made of de-husked fermented black lentils and rice. The starches are broken down during the fermentation process, making them easier for the body to digest. There are many types of idli, including rava idli, which is made with semolina. Sanna of Konkan is a regional variety. Idli sambar is a classic South Indian dish that consists of fluffy soft idli (savoury steamed cake) and hot sambar (vegetable lentil stew). It's a tasty, nutritious, comforting, and protein-rich dish. Medu vada is a Vigna mungo ( black lentil) based South Indian breakfast food. It's typically made in the shape of a doughnut, with a crispy exterior and a soft interior. It is commonly consumed as a snack in the South Indian states. The batter for the medu vada is mostly made of black lentils (urad dal). After soaking in water for many hours, the black lentils are mashed into a paste. Other ingredients such as asafoetida, methi seeds (fenugreek), ginger, cumin seeds, black pepper, curry leaves, chillies, and coconut pieces can be added to the mixture. It's then patted into doughnut forms and fried till golden brown in oil. Sambar (lentil and vegetable stew) and coconut chutney are typical accompaniments. Sambhar rice is a perfect combination for those who are bored of eating dal and want to try something different with rice. Sambhar's tangy and spicy flavours are blended well with rice. It is a very light meal that provides a treat to the taste buds. The strong spices of sambhar are balanced by plain rice. If you want to amp up the flavours, you can also have sambhar with lemon rice. Uthappams are a type of South Indian dosas. In contrast to a traditional dosa, which is crisp and crepe-like, uttapam is fatter and filled with toppings. The term is derived from Tamil words Appam and Utthia or Uttria meaning Poured-Appam. Uttapam and sambhar are a delectable combination as the two complement each other perfectly. The uttapam is loaded with vegetables and when dipped in sambhar, it melts in the mouth like s dream. You feel a burst of different vegetables, spices and flavours. 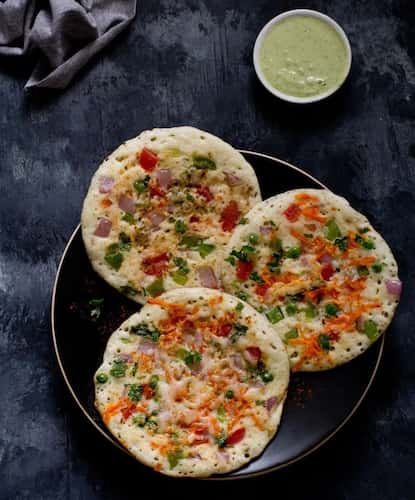 A dosa is a thin batter-based dish made primarily of lentils and grains that is fermented. Rice and black gram are the key ingredients, which are mashed together in a fine, smooth batter with a pinch of salt and fermented. Dosas originated in South Indian cuisine but have now spread across the Indian subcontinent. Dosas are traditionally served hot with chutney and, more recently, sambar. Beyond Sambar: 5 Perfect Side Dishes To Dunk Your Dosas

Tangy Tales: Make Your Sambar Tangy With These Solid Tips