According to Eater New York, the Michelin Guide made a new round of additions to its New York list, which consists of 30 restaurants across New York, including Sona. Actor Priyanka Chopra turned entrepreneur when she opened the modern Indian restaurant, Sona, in New York in March, 2021. It has been a hotspot for many celebrities, and has been gaining popularity with raving reviews about the food they serve at the venue.

Anyone from Bollywood, who has been to New York in recent times, has made sure to stop by at PeeCee’s eatery. We have spotted Katrina Kaif, Vicky Kaushal, Vishal Bhardwaj, Anupam Kher, and more recently Miss Universe 2021 Harnaaz Kaur Sandhu enjoying some drool-worthy Indian delicacies at Sona. But that’s not all, even Mindy Kaling has dined at the high-end restaurant.

Now, Priyanka has one more reason to celebrate, as the restaurant just got Michelin’s recognition. While it is yet to be awarded the rating, Michelin recognition itself is worth a celebration, right?

Priyanka took to her Instagram stories recently to announce the news, as she shared a screengrab of a news piece announcing the Michelin’s list of 30 new NYC restaurants, which included Sona. “Bravo @sonanewyork, We’re starting the week strong with Michelin's recognition”, PeeCee wrote in her story. 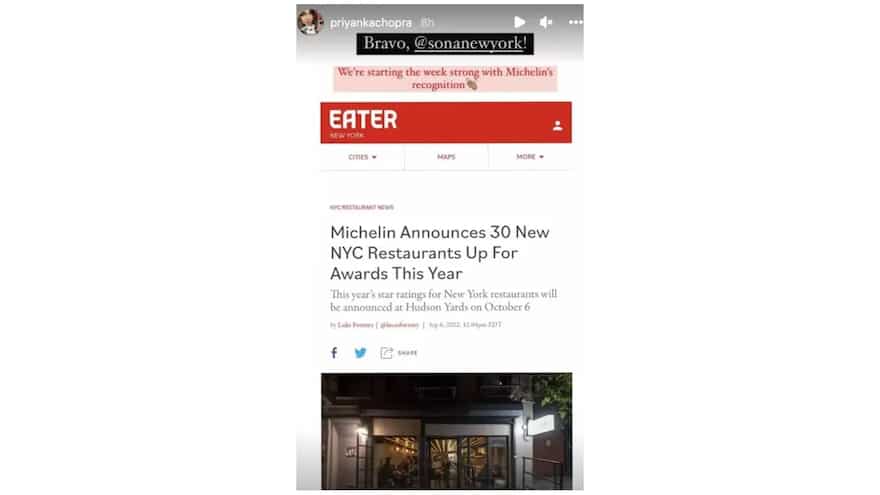 According to Eater New York, the Michelin Guide made a new round of additions to its New York list, which consists of 30 restaurants across New York that are competing for awards. The awards will be announced on October 6, 2022.

For the unversed, Michelin stars have become a badge of honour in the culinary world ever since US restaurants became eligible to earn Michelin stars for the first time in 2005. Michelin started its prestigious red guide back in 1900, which included anonymous reviews of European restaurants that focused on the quality and flavour of food. Today, Michelin stars are considered as a stamp of authenticity, and utmost quality of fine dining and food by the world’s top chefs and restaurant patrons. This is because it isn’t easy to obtain the recognition, given that only the best restaurants in town win the recognition.

Now with Sona in the league, it is certainly a big achievement for Priyanka and the restaurant’s team, spearheaded by Chef Hari Nayak.

Priyanka Chopra Indulges In Korean Barbecue; Here's All About The Food Trend