Kashmiri Naru Yakhi: A Curried Celebration Of The Lotus Stem

This region isn’t always known for vegetarian fare, but this dish is well worth a try.

Kashmir holds many secrets and one of the most wondrous is its cuisine. Drawing from many influences the food of modern Kashmir features primarily non-vegetarian due to the harsh climate that was unfavourable for more crops but there are an array of exquisite vegetarian dishes on offer. These mostly hail from the homes of the Kashmiri pundits and are heavily influenced by Mughlai cuisines. In modern Kashmiri cuisine, we can also see a lot of culinary styles from regions like Afghanistan, Persia and Central Asia in the traditional Wazwan but all bear the signature stamp of Kashmiri culture with complex spices like cinnamon, black cardamom, green cardamom, cloves, saffron, saunf, and curd (yoghurt) widely in their cuisine. Kashmiri red chillies are the other essential ingredient, this chilli lends dishes a vibrant colour, but is not pungent at all.

One vegetable that was hardy enough to bear the Kashmiri cold and become a staple of the cuisine is the lotus stem also known locally as Nadru or Kamal Kakdi. Lotus stem appears across India in various forms such as deep-fried chips or in pickles, but in Kashmir, they honour the indigenous plant in many inventive ways.

The lotus plant first arrived in Kashmiri cuisine during the 15th century under the rule of Badshah Ghiyas-ud-Din Zain-ul-Abidin. The King was on a boat ride around the Gill Sar and as they admired the beauty of the lotus flower, they were struck with an idea. They harvested the plant, picked it from the water and decided to add it to the evening menu. Since then, it has been at the heart of many Kashmiri dishes.

Since then, Nadru can be found in many various forms. Meat curries, dals, fried as a snack or salted and pickled for later use. One of the most famous dishes however is the Nadru Yakhni, a yoghurt-based curry which takes time and patience to conquer, but yields a delicious feast that’s mild and yet packed with flavour. 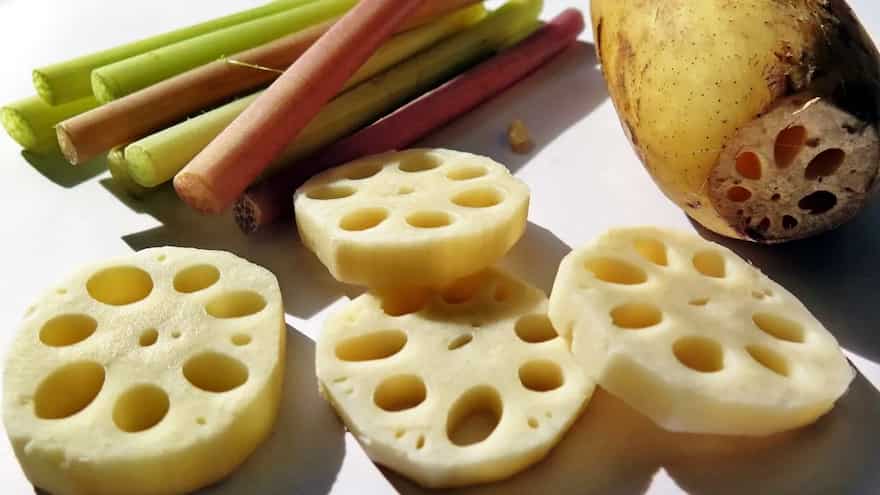