Is Baharat, The Lebanese 7 Spice, A Distant Relative Of Garam Masala? As you brag about your cooking skills with the Indian garam masala, it's time to take inspiration from Lebanon. One spice blends your kitchen arsenal must have, is Baharat. Use this Lebanese spice mix to season meats, poultry, and fish or to give your fave meals a new deliciousness. In Arabic, "Baharat" means spices. Most frequently used in Middle Eastern, Turkish, and Greek cooking, this all-purpose seasoning differs slightly from place to country. Another name for it is Lebanese 7 spice. Baharat recipe's unique quality goes beyond its brief ingredient list. To give dishes a smokey flavour, you may add it to soups, stews, or casseroles. Alternatively, why not garnish dips, like hummus? The flavour they produce when combined is what makes it so exotic.

Garam masala and Baharat share many of the same basic spices, yet some noticeable variations exist. Baharat is more widespread in the Middle East, while Indian food uses the former more frequently. Garam Masala has bay leaves and red chilli powder in place of the paprika in Baharat.

One can get readymade Baharat. However, it is ideal for preparing at home for optimum results and taste. The list of ingredients is a bare minimum. These spices can be used as a whole or in grounded form. As mentioned earlier, that is also known as the Lebanese 7 spice, but there are eight spices. One requires cardamom, black peppercorn, cloves, coriander seeds, cinnamon, nutmeg, cumin, and smokey paprika. For extra fieriness, replace smokey paprika with Hungarian or hot paprika. If all these are used in the whole form, pound them together into a semi-smooth coarse powder. For best results, use mortar and pestle.

Store the blended Lebanese spice in an airtight glass container and keep it away from direct sunlight. Use it before three months. If it's left any longer, the blend may lose its efficacy. For a Turkish tweaking, add dried mint flakes. 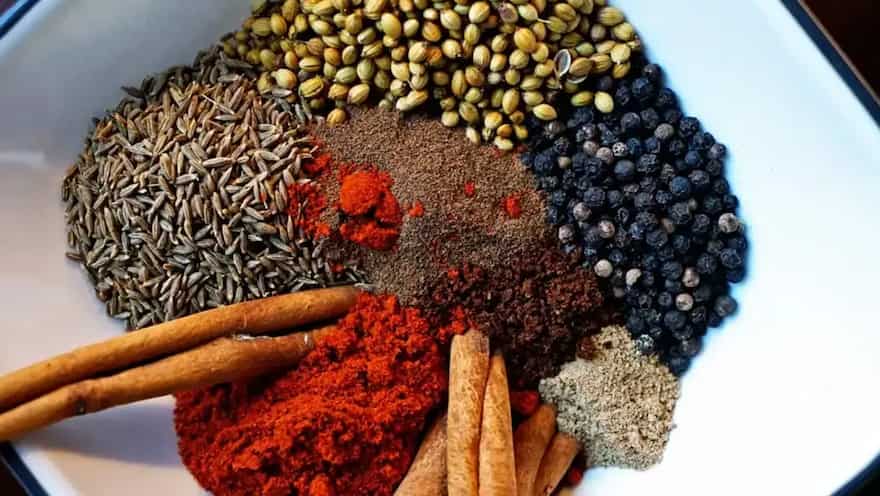 Use Baharat as a marinade by blending it with lime juice and olive oil. Marinate paneer chunks in this mix and leave it for an hour. Later, grill and enjoy it. This all-seasoning spice is most frequently used for chicken, but it is also widely used in lamb or beef. Sprinkle as a condiment over pita bread, popcorn, fresh dips, or over vegetables like eggplant before roasting to add more flavour depth.

Try cooking your favourite Indian dish using Baharat, replacing garam masala. Are you in for this experiment?

Garam Masala: How To Make Quintessential Indian Spice At Home

Tabbouleh: All About Lebanon’s National Food; 3 Recipes To Try