A self-confessed foodie, Mouni also did not leave a chance to try some of the local cafes and restaurants in Turkey. Actress Mouni Roy who made waves early this year for her much publicised wedding with Suraj Nambiar, is eagerly awaiting the release of her next mega venture, Brahmastra, wherein she would be sharing screen space with Ranbir Kapoor and Alia Bhatt. The sci-fi drama is all set to release in September and the expectations are high. Mouni is also judging a popular dance reality show. Amid her packed schedule, Mouni decided to take a small break and fly to Turkey with her husband. Over the weekend, Mouni posted a slew of images from the ever-so-beautiful of Istanbul. A self-confessed foodie, Mouni also did not leave a chance to try some of the local cafes and restaurants, and one of the first few dishes she tried was a salad. Arguably one of the fittest actors in the movie and television industry, Mouni has time and again shown just how a little bit of balance in your daily diet can take you a long way.

On Sunday, for her brunch, Mouni opted for a hearty green salad. Her plate comprised some fresh greens in the form of chopped spinach and arugula, which were topped with parmesan shavings. We also spotted some boiled mushrooms, and adding a lovely middle-eastern touch to the salad was a swish of hummus on the plate. Right next to this yummy salad was a bowl of fresh guacamole, and she rounded up her low-carb brunch with a hot cup of black coffee. 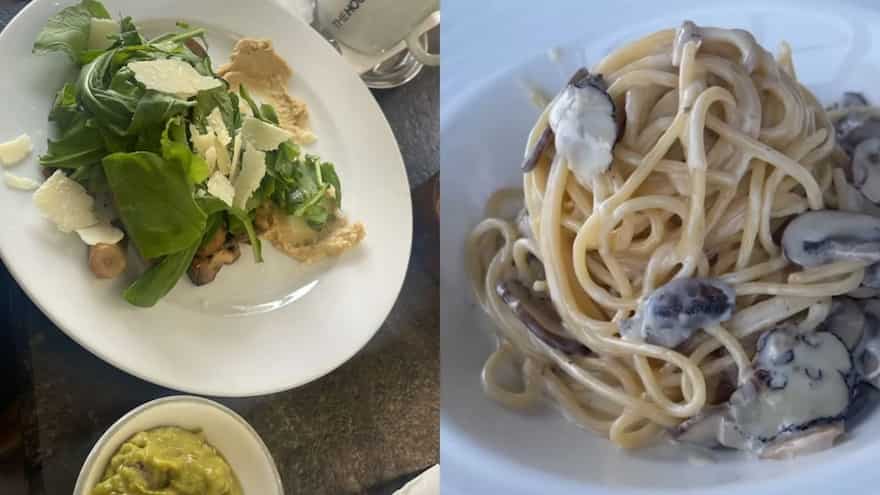 Later in the day, of course, she let out the glutton in her and indulged in a generous bowl of spaghetti alfredo, the image of which she shared on her Instagram stories. Balance, you see?

Taking a cue from Mouni’s low-carb fare, we have also curated some salad ideas that you can easily try in the comfort of your home. Here you go:

Kachumber Salad: Can’t make Fattoush at home, no problem. Our desi Kachumber salad is no less nutritious and flavourful. Just chop up medium cucumbers and tomatoes and onions. Mix them up nicely. Throw in some chopped coriander, drizzle over some lemon juice and you are done. You can have it as is, or serve it as a side dish with your main meals.

Salted watermelon salad: Since the summer is upon us, it would be a crime of sorts to look over the delicious summer staples like melons. Did you know more than 90 percent of watermelon, making this salad your perfect low-cal and low carb companion? You can cut back on the amount of salt in your salad of course,

Paneer sweet corn salad: A salad that would also be loved by kids, yes it exists. Soft, creamy and crumbly paneer mixed with crunchy sweet corns promise a joyride of flavours and texture. Possibly the easiest salad to put together among all the three.

Kochi, Thrikkakara, And The Unexplored Flavours Of Urban And Suburban Cuisine

Soha Ali Khan Is Sipping On Coffee In London