Currently, Alia Bhatt is one actor in Bollywood who has all the reasons to celebrate. The star is basking in the success of her latest movie, Brahmāstra: Part One – Shiva, in which starring opposite her husband, actor Ranbir Kapoor. Besides, the couple, who tied the knot in April this year, is all set to welcome their first child. On top of that, she recently released the teaser of her first Hollywood outing, Heart Of Stone, alongside actor Gal Gadot, and fans simply can’t stop raving about her. While Alia is at the top of her game in terms of her career, it seems she is also enjoying her personal time.

The mom-to-be is having those cravings that are too hard to resist. And from what we see, Alia loves pizza way too much now. The other day we told you how Alia was asking her fans and followers on Instagram for suggestions on pizza places in Mumbai. Read more about it here. While we are not sure of what suggestions were made to her by her followers on social media, we do know who actually came to her rescue and treated her to a drool-worthy pizza. Any guesses? No, it isn’t the dad-to-be Ranbir.

The pizza came from actor and fitness icon Shilpa Shetty. Alia took to her Instagram stories to share a picture of a lip-smacking pizza. The cheesy delight was loaded with mushrooms and veggies. We also spotted some baby tomatoes, red jalapeno, and some basil leaves. Take a look: 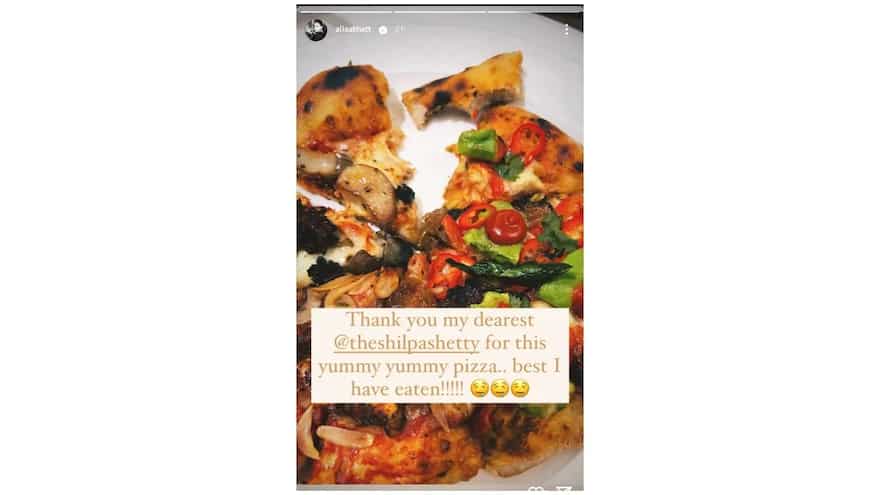 Looks absolutely delicious and wholesome, doesn’t it? “Thank you, my dearest Shilpa Shetty, for this yummy yummy pizza. Best I have eaten,” Alia wrote in the story, along with three drooling emojis. Since Alia loved the pizza so much, Shilpa promised that more would come soon. Resharing Alia’s story on Instagram, Shilpa wrote, “So glad you liked it..more..coming soon..Enjoy Alia Bhatt”, along with heart and smiling emojis. Isn't that adorable?

If Alia and Shilpa’s pizza banter has got you craving, we’ve got some quick and easy pizza recipes right here.

Remember When Alia Bhatt Celebrated With A Vegan Burger?