Add Makhana To Your Kids Diet, Make It Nutritious Mahkhana, Lotus seed, Fox nut, Gorgon nut: these are all names for the Euryale Ferox plant's seed. Throughout India, China, Japan, Korea, and eastern Russia, the shelled and dried variety of this seed is eaten. It is well known in the majority of India by the street name phool makhana or just makhana.

Makhanas are a common element in kheer and laddoos, as well as in vegetable gravies, in many north Indian households. However, they often only become significant during the twice-yearly Navratris when used as a portion of fasting food.

Makhanas are calorie-dense foods that fill you up quickly and leave you feeling satisfied. Makhanas are a great meal option for growing babies as well as a fantastic dietary supplement for adults. The advantageous healthful makhanas are often found at food stores or supermarkets. Additionally, there are many ways you may incorporate these healthy seeds into your baby's diet. Here are some makhana or fox nut dishes for infants that you might enjoy. 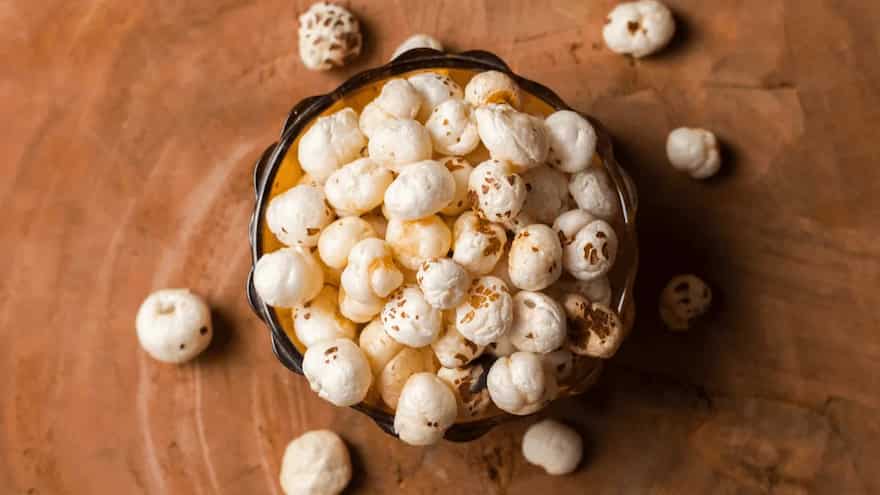 When you are travelling or pressed for time, making this cereal powder is an excellent option for your baby's diet.

Check for worms by dividing the makhanas in half. Dry roast the seeds until crisp in a heavy-bottomed pan. Transfer to a plate. Now roast the cashew nuts over low heat. Let it cool. In a mixer jar, combine all the ingredients and pulse until a fine powder forms. Put the powder through a sieve and seal the jar.

Jaggery, fruit puree or dates syrup (as per choice)

Makhanas should be divided in half and set away. For two to three minutes, roast the makhanas in a small pan of hot ghee. Cook the makhanas with water until they are mushy and goopy. Mix well before adding your preferred sweetener. The makhana kheer or porridge can be blended in a mixer for a smoother texture.

You can make Makhana Sooji Kheer or Paysam as a dessert. The distinctive flavour of this dish will make it a favourite among children.

A pinch of cardamom powder

Dry roast makhana and sooji separately until crisp and golden respectively (you can add one or two drops of ghee for enhanced flavours). Let it cool. Grind it into a coarse powder. Heat milk in a pan, add this powder and a pinch of cardamom powder. Add jaggery for sweetness. You can add any dry fruit powder to make it richer and tastier.

Anytime after the age of six months, babies can be introduced to makhanas. It is advisable to start with lesser doses; for instance, three to four days can be covered by a teaspoon of makhana powder. You can gradually add more makhanas to your baby's diet after they're comfortable with it and show no signs of allergy or other problems. Lotus seeds are a wonderful finger food choice for toddlers, and older babies who are able to chew their food can be fed roasted seeds.

Makhana: Everything You Need To Know About Fox Nuts

How to use makhana in everyday recipes