A vegetable that was consumed by Homo sapiens between 7000 and 10,000 years ago has changed over time and is still utilised in many different ways. Aloo is one of the most popular foods today, especially in northern India where it is used with a range of foods, diverse combinations, and flavourings. The majority of people enjoy aloo, which is the cuisine that goes well with the most dishes. A simple vegetable that may be found on the kitchen shelf of any home is aloo. Among all of its meals, the aloo gravy has special significance.

Aloo has a significant quantity of fibre, protein, and carbs. Aloo is one of the most significant and popular dishes since it is one of the few vegetables that can be eaten when fasting. It's one of the best foods to eat while fasting because its nutritional value also hits the target. A dish that is overly flavorful and mouth watering is the gravy. Many other veggies that are suitable for a fast can be coupled with this recipe.

Depending on the variety and preparation method, potatoes can have a variety of nutritional values. For instance, roasting potatoes instead of frying them adds more calories and fat. It's also significant to remember that potatoes' skins are rich in vitamins and minerals. Potatoes' nutritional value can be greatly diminished if they are peeled. 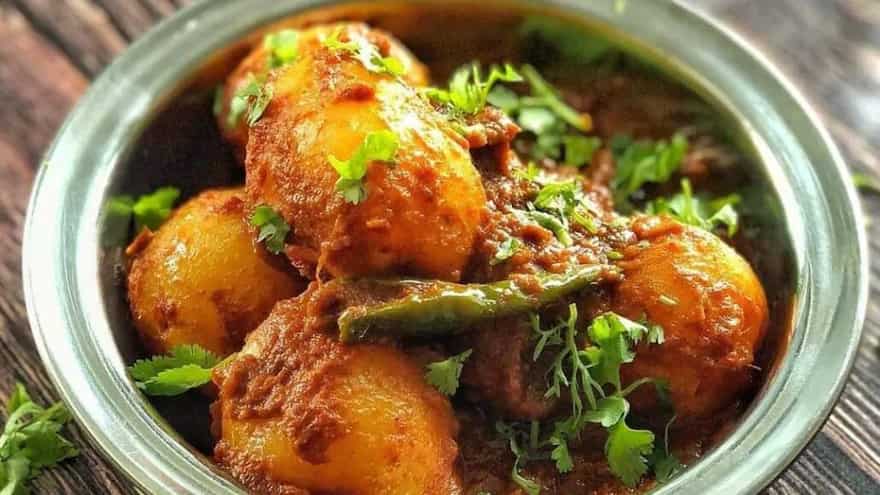 Flavonoids, carotenoids, and phenolic acids, among others, are abundant in potatoes. Through the neutralisation of potentially damaging chemicals known as free radicals, these substances function as antioxidants in the body. Free radicals can raise the chance of developing chronic illnesses including cancer, diabetes, and heart disease when they build up. For instance, a test-tube investigation discovered that the antioxidants in potatoes may inhibit the development of liver and colon cancer cells. Purple potatoes, for example, have been discovered in studies to contain three to four times as many antioxidants as white potatoes. They may be more successful in scavenging free radicals as a result.

This dish could be cooked easily and using all the ingredients which one could eat in fast as well. Without draining much energy in cooking and having good nutritional values, this dish tops while fasting.

Aloo Curry without Onion and Garlic