Smelly tiffin? Here's how you can clean it! Those who are skilled in the art of cooking are blessed! However, cooking can occasionally leave behind unpleasant odours from a variety of ingredients that are challenging to get off of equipment. Not alone do meats and eggs leave an unpleasant smell behind after cooking; spices can also do this. The majority of foods in an Indian kitchen are prepared with different kinds of spices, which might leave an odour on the kitchenware. Tiffin boxes are smelly utensils because the food is kept in them for so long and the odour gets absorbed by the box.  Here are some helpful tips for getting rid of the scent of cooking from them. 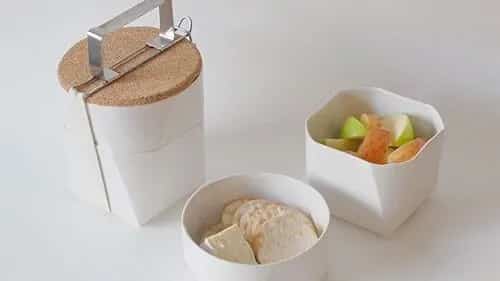 A stale cooking utensil can have 1-2 tablespoons of coffee added to it before water is added. After letting the coffee brew for 2 to 3 minutes, extinguish the flame. After that, let the brewed coffee sit in the container for 15 to 20 minutes before rinsing it with dish soap.

Any type of odour can be eliminated by using potatoes. Potatoes should be cut into thick slices before being lightly salted on both sides. Simply leave these potato slices in your foul box for 10 to 15 minutes, then wash them off.

The delightful spice cinnamon can be used to mask unpleasant odours coming from your cutlery. Simply place 3–4 cups of water and a cinnamon stick in the utensil and boil for 5 minutes. Let it cool to make your utensil odourless afterwards.

Given that you can do everything with vinegar, you could dub it the kitchen's hero. It's not simply a flavouring ingredient; it's also a superb cleaning that may eliminate strong aromas in your kitchen. Simply pour a cup of white vinegar into the nasty appliance, cover it, and let it simmer for 10 to 15 minutes. The harshest odours can be eliminated using this method.

This is the most straightforward advice you can take to prevent those bothersome odours from your utensils. Take a bowl of salt and a few lemons that have been sliced in half. Rub the harmed utensil thoroughly after rubbing the lemon slice in the salt. After 15-20 minutes, remove it with dishwashing soap or detergent.

Lemon peels citric acid is beneficial in a number of ways. It's an effective cleaner that may also be used to get rid of the strong cooking scent. It only requires boiling some fresh lemon peels in the same vessel for 20 to 30 minutes before washing them off.

You might not be aware of all the uses of baking soda, but it's another kitchen hero! Mix two tablespoons of baking soda with four to five tablespoons of vinegar to get rid of overpowering meat odours after cooking. Lemon slices cut into thin slices are added to the mixture. Use this mixture to clean your dish right away.

How To Get Rid Of Musty And Mildew Smell In Kitchen Sink Drain?

How To Remove Egg Smell From Utensils?