The freedom struggle of India has myriad layers to it. But how many of us know that sweets played a crucial role in this journey? Especially, laddoos secured a prominent place during various movements, revolts, and preparations against fighting unjust acts. Today, laddoos are an inseparable part of our festive celebrations. But, that wasn't the typical case in the history of India's freedom movement.

Here is a sweet saga of our independence, which may make you honour the heritage of Indian traditional sweets.

Bomb Turned Out To Be Rasogolla The incident started when Sri Chettur Sankaran Nair, famous for his radical ideology toward the British, was about to host a gathering. It was around 1930 when the British assumed a telegram hinting delivery of a bomb. The English cops deciphered a telegraph stating "Bengali Sweets Dispatched" weeks before the grand meeting. A red alert was issued for several days before the shipment arrived. To the dismay of the Britishers, they discovered that the package contained the celebrated rasagolla from Kolkata, not the suspected bombs.

For many years and during several revolts, movements and wars, revolutionaries across the country kept using sweets as a tool for communication regarding threats or upcoming plans. In the history of the Indian freedom struggle, often phrases such as "Send Bengal Sweets" or "Send Mumbai Halwa" had an encrypted communication. Either they meant an agitation or a bomb blast, including assassination. Barfis fashioned differently could signal fresh cartridges to a parcel sent.

Another special sweet that made rounds during the history of the Indian freedom struggle was besan pinni. They were made with chickpeas flour, clarified butter or ghee, nuts, and jaggery and consumed as a health enhancer. Apart from working as means of messengers, sweets also served as sources of life-saving food. Ladoos, for example, were turned into bombs. But they also helped the Indian soldiers and freedom fighters to stay alive in adverse conditions. Particularly after the Sepoy Mutiny of 1857, several freedom activists and fighters had to take refuge. During that time, boxes of laddoos kept them informed of events and served as a source of life-sustaining food. Sesame or til laddoos were prevalent supplies for the Indian soldiers fighting for the British in both World Wars. Similarly, chickpea flour or besan laddoo rose to fame after 1857. Later motichoor laddoos to added to the list. 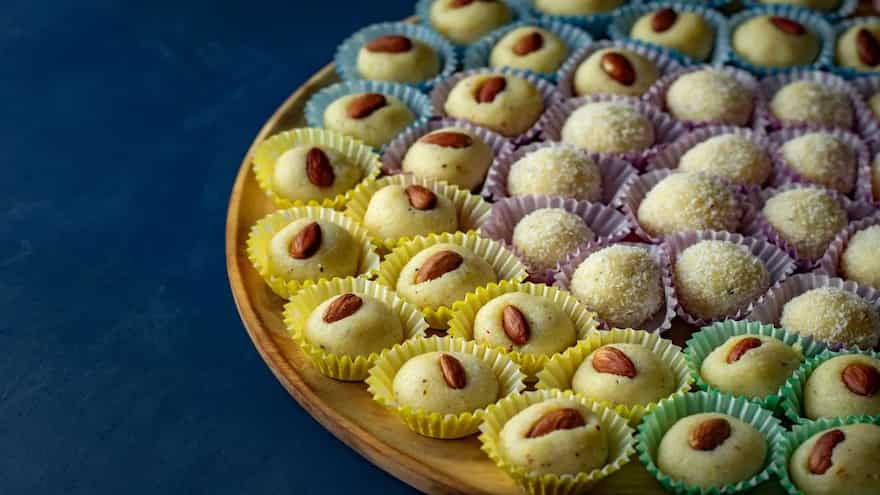 A Platter Of Sweets

The British rule banned large gatherings, as these were the hubs when activists would plant the seed of greater revolts against the Crown. However, the Indian freedom champions and leaders found an alternate, i.e., humble sweet shops and eateries. These used to be the secret meeting points for the revolutionaries to gather, plan, discuss and eat without getting imprisoned. In fact, leading names such as Chandrashekhar Azad and Bhagat Singh used to go to their famous alleyways in Matia Mahal at night for khullad chai or halt at Ghantewala for puri-aloo and halwa. One can comprehend the importance of these places from the fact that in 1912, the renowned Chandni Chowk canal and the trees lining it were destroyed. It was blaring a deterrent to Dilliwalahs for sheltering the revolutionaries who threw a bomb at Viceroy Harding.

How simple dish like sweets can create an extensive impact; the Indian freedom struggle gives that powerful narrative to the world.