On Monday, Tara took to Instagram to give us a glimpse of Navroz meal that Tara and her family prepared at home. Actress Tara Sutaria who debuted in the Hindi film industry with ‘Student Of The Year 2’, has multiple interesting projects in her kitty right now. Despite being a newbie, she is also associated with many high-end international brands. The 26-year-old is also a singer, and only those who follow the actress on Instagram would know that the actress is a self-confessed foodie who can also cook up a storm. The Parsi actress rang in Navroz, or the Parsi New Year with a spread to remember. The word Navroz, is a Persian word, made up of ‘Nav’ which means new, and ‘roz’ which means ‘day’. It is the first day of the Iranian new year. It begins on the spring equinox and marks the beginning of Farvardin, the first month of the Solar Hijri calendar, and usually falls on 21st March every year.

The day is of immense significance among followers of Zoroastrianism, and Parsis in India make sure they celebrate the day with much aplomb.

On Monday, Tara took to Instagram to give us a glimpse of Navroz meal that Tara and her family prepared at home. Starting with the traditional Parsi Lagan mutton Pulao, a recipe she borrowed from her grandmother. Lagan in Parsi means ‘a wedding’. Lagan mutton pulao, lagan nu custard are all dishes that you commonly prepare for weddings or a festive ocassion. The pulao looks a lot like biryani, even the use of rice is basmati (long grain) and the meat is fried in heaps of masalas before mixing with rice, however this pulao is not usually prepared in dum-style, like you prepare your biryani. Next item on Tara’s menu was a fish item that Tara described as, “ the spicy, sour and sweet fish we call Saas ni macchi”. Saas ni macchi is fish cooked in delectable white sauce. The sauce is prepared with maida, egg, vinegar, garlic, cumin and chillies. The white gravy is renowned for its eclectic flavour. 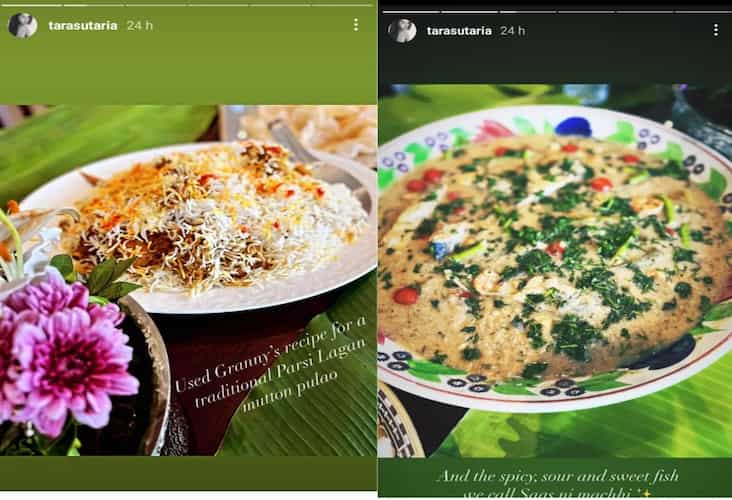 The gravy requires some skill, but once you get a hang of it, you would be making it quite often. Until then, we have a Parsi fish recipe that is perfect for rookies. This Parsi-style fried fish can be an ideal appetiser to any party. You can even pair it with rice and enjoy it like a main. Try it today and let us know how you like it.