Tahdig : This Rice Dish Is The Jewel Of Persian Cuisine What makes a life-changing dish? Michelin stars or ingredients that are worth their weight in gold? In theory, it would make sense to measure the worth of a meal in time, skill, or money, but in reality, it’s rarely the case. The dishes that tend to make the most impact are the ones that are steeped in memories; those with a sense of family or culture which evoke our ties to something a little bit bigger and more permanent than ourselves. Tahdig is one of those dishes.

The Persian rice dish is eaten and revered in every echelon of society. It’s being fought over at a family dinner table while across the world it’s praised by international chefs in prestigious publications. Literally translated, Tahdig means ‘bottom of the dish’ and that is precisely the part of the dish that everyone is raving about. 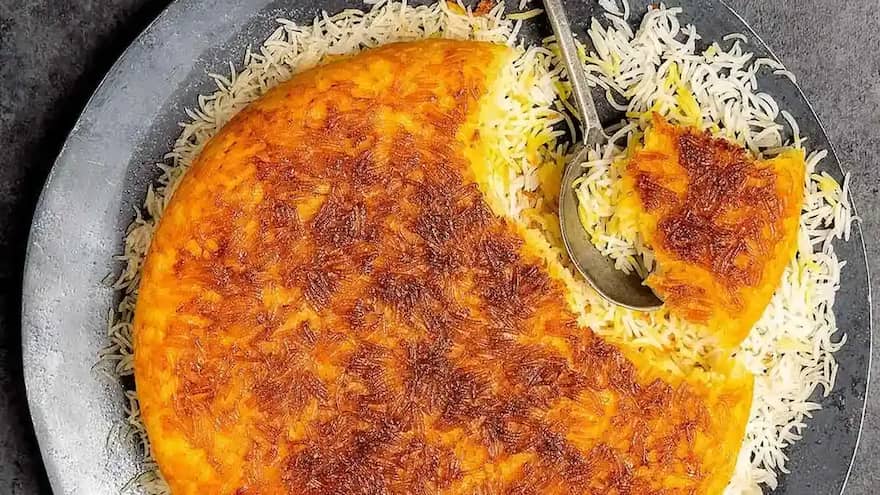 Slowly pan-fried with a crunchy base and a perfectly soft and buttery inside, Tahdig is one of those dishes that’s a labour of love. Tahdig has been in high demand since the 1800s during Iran’s Qajar Dynasty and was thought to have become popular due to a happy accident in the king’s palace. Servants in the king’s kitchens would make their meals out of the leftovers from the royal banquet and would argue over who got to eat the crunchy rice at the bottom of the pot. When the chef was asked about the commotion in the kitchens, the king demanded to try some himself. Rumour has it that he enjoyed it so much that it became a regular starter to all his meals.

There is no one right way to make Tahdig, since the essence of the dish is the crispy base, not what’s on top of it, so the flavours are only as limited as your imagination. Meat, vegetables, chicken wings or even a Tahdig waffle, all have been tried and tested. So try out a recipe of your own and put your spin on this timeless dish.

●    2 tbsp grape seed oil, or any neutral-tasting oil of your choice

1.    Mix the saffron into 1 cup warm (but not hot) water. Let sit for at least 10 minutes to let the saffron release all of its aromas.

2.    Rinse the rice under cool running water until the water runs clear.

6.    Spread the rice-yogurt mixture evenly on the bottom of a nonstick pot.

7.    Sprinkle 1 cup of the remaining cooked rice on top, followed by 2 tablespoons of the dried cherries, a pinch of orange zest, and a pinch of cinnamon.

8.    Repeat the layers and finish by dotting the top with butter and pouring over the saffron water.

9.    Wrap the lid in a kitchen towel and secure it around the handle with a rubber band.

10.    Cover the pot and cook over low heat, 25 to 30 minutes or until the rice around the edges is golden and crispy;

11.    Remove the lid, invert a large serving plate over the pot, and carefully flip them over together. Sprinkle the tahdig with pistachios and serve!

5 Persian Desserts That Will Make You Drool

Chelow Kebabs: An Iranian Dish That Landed On The Indian Plate