Sara Ali Khan Is Giving Us Food Goals From Amsterdam If there’s one thing that Sara Ali Khan loves it’s food and travel. The actress keeps sharing photos from her travels to her social media and the majority of these photos feature Sara devouring regional cuisines of the places she is travelling to. Currently, Sara is taking a Euro-trip and her latest stop has been Amsterdam. Internet is loaded with pictures and stories about her ongoing trip. Prior to Amsterdam, Sara was spotted enjoying food in London. As Sara spends time in Amsterdam she is being spotted trotting around the city; checking out new places to grab a healthy meal at. From sandwiches to smoothies, Sara has been on quite a healthy binge in Amsterdam.

Also Read: Sara Ali Khan Is ‘In Mood For Good Food’ With This Massive Asian Spread: 5 Asian Recipes To Try 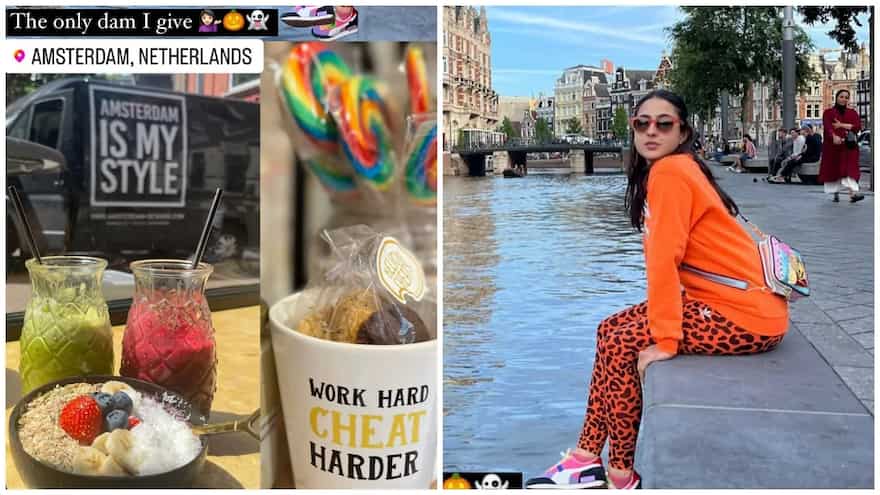 A super popular celebrity on social media, Sara  keeps her 40.7million Insta-fam entertained with tempting food content featured from her exotic vacations to many places around the world. Sara’s photos are enough to tempt every foodie in to wanting to visit the place of which Sara shares the regional cuisine! Wherever she visits, the actor marks her stay with sinful indulgences. And it was no different in Amsterdam. In Sara’s Instagram story that she shared from Amsterdam, one could see a collage featuring Sara sitting by a dam, and a photo of some yummy foods. In the first image (of the collage), we can see Sara posing besides a canal. The second picture has a glimpse of her meal that includes colourful smoothie bowl and juices. Finally, the third image was all about decadent indulgence - we could see cookies in a coffee cup and colorful candies by the side. "Work hard, cheat harder," the coffee cup reads. Sara captioned the collage, "The only dam I give."

This wasn’t Sara’s first foodie moment in Amsterdam. The actress posted about her morning meal too which she enjoyed in European style, stating that she’s "so egg-cited". As per picture, the meal included breads, scrambled eggs, greens, cherry tomatoes, avocados and bacon. She termed the nutritious and healthy breakfast spread as "Breakfast of champions.”

Kunal Kemmu Bonds Over Ice Cream With His Family

Pankaj Tripathi Cooks Litti Chokha With Friends In His Village