Reportedly, Richa and Ali are having a complete 'Dilliwali' vibe at the wedding Richa Chadha and Ali Fazal are the latest Bollywood couple to tie the knot. As the pictures from their pre-wedding celebrations trend on social media, we can’t help but look at all the details from the grand affair. The actors are getting married today (on October 4) in Mumbai, but we are still drooling over little tidbits from their sangeet, haldi and cocktail ceremonies that took place in Delhi over the past three days.

We told you about how they had a halwai making fresh shahi tukdas for guests, and now we have got some details of all that went behind the bar at the actor couple’s sangeet. Reportedly, Richa and Ali are having a complete 'Dilliwali' vibe at the wedding, with glam, glitz, and amazing food. While scrolling through Richa's Instagram handle, we came across a story that features the bar setup from their sangeet party that had the couple’s filmy side on full display.

In the picture, we could see the cocktail menu, with a glimpse of the bar and the bartender. The menu reads, "Filmcity ka Cocktail Bar". Wonder what was so unique about it? Let us tell you. Each of the drinks were named after the characters of the two actors from their popular movies and web series. There was 'Guddu Bhaiya Ki Paan, Gulabo Mirzapur Wali', 'Tara Madam Ki Ghutti', 'Gabbar Khus-e-Khaas Section 375 Mojito', 'Nagma Khatoon Ka Mohan Masala Numbu - Wassepur Se', and 'Bobby Jasoos Ka Banta Jaljeera - Tasavur Kijiye'. That has to be the quirkiest bar setup we’ve come so far, isn’t so?

Take a look at the story: 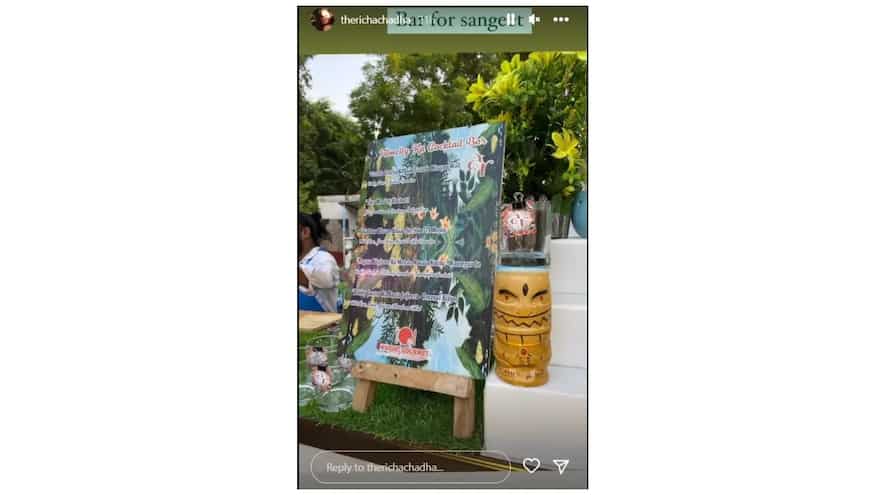 "Bar For Sangeet", Richa revealed in her story. Earlier, the bride-to-be reshared another story featuring the making of Shahi Tukda at the wedding celebrations. It was being prepared in two large containers. Sharing the picture, Richa wrote, "Lol when two foodies decide to celebrate their union". Read more about it here. According to other reports, Richa and Ali's pre-wedding menu featured several popular foods from Delhi, considering the bride hails from the Capital. These include the famous Rajouri Garden ke Choley Bhature, Natraj Ki Chaat and more. Quite an interesting fare, isn’t it?

Richa Chadha's Favourite Foods Are On Her Wedding menu