Poha Idli: Time To Indulge In These Fluffy Delight

Poha Idlis are soft and light. These are fermented by baking powder and mollified by curd. What does one need in an ideal breakfast? Three simple things: health, taste, and easy cooking. Here comes Poha Idli meeting each of those expectations with great ease. What? Poha again? Yes, but this time in a much desirable and loved Idli avatar. All it needs is poha of course, accompanied by curd, baking powder, salt, idli rava, and lastly water. The poha, blended to a powder, is mixed with non-roasted Rava, thick curd, baking powder for fermenting and a dash of salt to make an Idli batter. Then what? Just steam cook the batter in the idli moulds and get ready to savour the soft, sour, fluffy Poha Idlis. The no-frills Idli prepared without overnight soaking is equally good for both time-pressed working people and cooking amateurs.

Idlis are said to have originated in Karnataka, and the earliest mention of the dish is found in a 920 CE Kannada language work, Vaddaradhane, by Shivakotiacharya. Interestingly, the word ‘idli’ is a Tamil word made of ittu and aavi, which means cooked by keeping in steam, and no wonder, Tamil Nadu also claims to be its founder. However, there are more claims to the original origin of Idlis. One of these claims is by a Food Historian, KT Acharya who says that Idlis may have arrived in India from Indonesia around 800-1200 CE, as there is an age-old practice of consuming fermented and steamed foods in the country. Even Gujarati historians do not leave behind and believe that the Saurashtrian textile merchants introduced idli to South India during the 10th and 12th centuries. The staple South Indian breakfast is much loved throughout India for its low-calorie count and health benefits. Two main ingredients for an authentic Idli include parboiled rice and split black gram dal where the ratio of dal to rice should be 2:1 and is flavoured with fenugreek seeds. The overnight soaking process of the ingredients helps in fermentation, enhances the nutritive value and ensures better metabolism of the calcium and protein-rich Idlis. 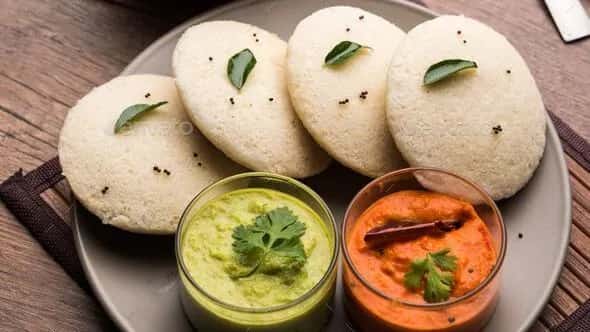 Over the years, many variants of Idlis have come up. Rava and Poha Idli made of semolina and flattened rice are the convenient variants that can be made at any point in time. Sanna of Konkan and Malli Idli fried with coriander and curry leaves are other regional variants.

Poha Idli is a super quick and easy recipe that allows one to relish home-cooked favourite South Indian staple Idlis effortlessly. Poha makes idli fluffy while rava gives the needed graininess. And mind the difference between regular Rava or semolina which is finely ground durum wheat and idli rava,which is coarsely ground rice.

Idli Poha: The Best Of Maharashtra And Chennai On Your Plate

Idli Burger: Is It An Idli, Is It A Burger? Try And Tell

Idlizza: We Combined Idli And Pizza And Got The Breakfast Of Our Dreams