Nutella And Banana Rolls: Try This Sweet Breakfast From Italy

These perfectly balanced rolls melt in your mouth, and make a great breakfast for a tiring day ahead Nutella and Banana Rolls can be the perfect, most delicious and healthy breakfast for  you. Be it a lazy Sunday or a special occasion, these rolls will not disappoint. On top of that, it is a super easy dish to make for the ones looking to make their kids happy. Well, Nutella, in 2005, entered the Guinness Book of World Records for the largest breakfast in the world. It became so famous that February 5 every year is celebrated as World Nutella Day worldwide.

It is not easy to prepare a meal for guests without making a bang and trying something special. Nutella and Banana Rolls serve both purposes, they suit everyone and they are healthy to eat. Just take care of the amount of Nutella being used. These rolls filled with creamy, delectable Nutella are a sure hit among children and adults alike.

A Glimpse Into History Of Nutella And Banana Rolls

Before understanding the history of these rolls, it is necessary to know where Nutella came from. Nutella was invented in 1964 by Pietro Ferrero. It is a name for an Italian cream containing cocoa and hazelnuts. The delicious ‘cream’ was launched on April 20, 1964, in the Italian city of Alba. It is said that the idea of making Nutella struck Ferrero when he watched a group of factory workers eating bread, tomato and cheese. He wondered if he could make anything that would taste sweet and could be eaten as a dessert with the leftover bread.

After World War II, Ferrero shifted from Turin to Alba and stayed there to invent the most loved Nutella. Today, the same ingredients used by Pietro are used in making the dish. In 2014, Nutella celebrated its 50th Anniversary. To celebrate the event, the Italian Postal Service, the national postal service of Italy, released a stamp in honour of the dish. Interesting, isn’t it?

Gradually, people started making rolls in France with Nutella stuffed in them. Someone, it is unclear who added Banana to the dish to give it a healthy and sweeter turn. The dish has stuck with us since then.

Here’s how you can make Nutella And Banana Rolls. The dish is fairly simple to make and takes only a few minutes. 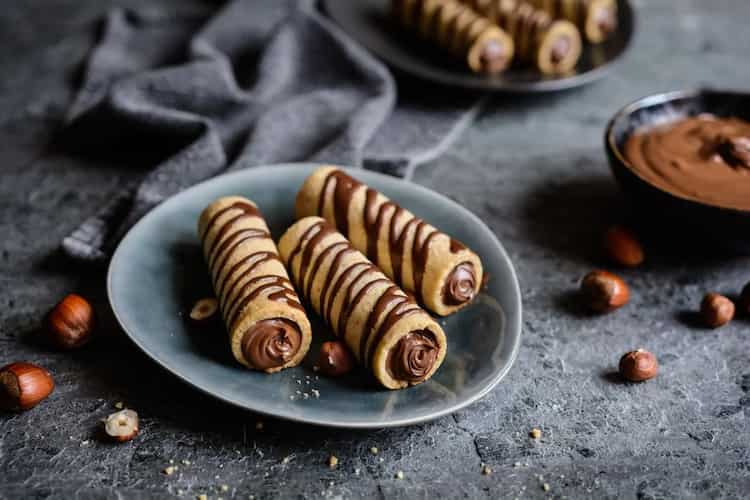 . Preheat an oven to 190 degrees Celsius.

. On a baking paper, unroll the crescent rolls and spread Nutella over them.

. Place each piece on the open roll and roll them.

. Then, bake the rolls for about 12 minutes until they turn brown at the bottom.

These are best served hot. But if someone wants to keep them for later, they must make sure that they heat them before eating to enjoy the maximum flavour. With this dish, say goodbye to the cravings. It is even better for people with a sweet tooth.

Everything Is Fair When It Comes To Love, War and Nutella

This Valentine’s Day, All You Need Is Love And This Nutella Tart Recipe By Chef Pankaj