Both Bipasha and Karan are known to be foodies, who also keep their fans updated with all their foodie shenanigans Celebrity couple Bipasha Basu and Karan Singh Grover are all set to embrace parenthood for the first time. The actors announced their pregnancy in August with an adorable picture and a heartfelt note, and ever since that their fans and followers have been super excited. Recently, Bipasha also had an intimate ‘Shaadh’ ceremony or the Bengali ‘baby shower’ at her place. The mom-to-be enjoyed a yummy spread prepared by her mother. It consisted of some of her all-time favourite foods - rice, aloo bhaja (potato fritters), potol bhaja (pointed gourd fritters), dal, mangsho (chicken curry), chorchori, chutney, and more.

It seems like Bipasha is eating her heart out, and giving in to all her cravings during this time. In her latest Instagram update, she was spotted gorging on some desi sugary treats. Now, both Bipasha and Karan are known to be foodies, who also keep their fans updated with all their foodie shenanigans, and their journey to parenthood is no different. Bipasha has been sharing all about her pregnancy cravings, and in her latest story, she uploaded a video of her noshing on a jalebi. Take a look at some of the snippets from the video: 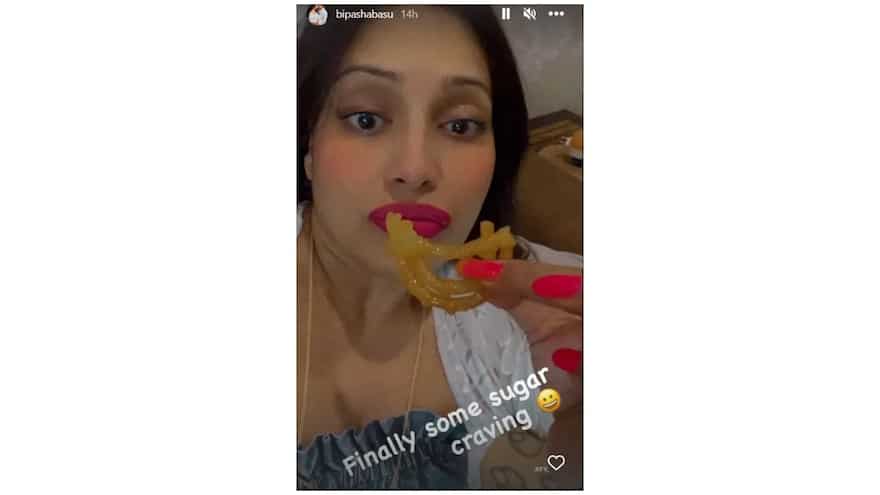 “Finally, some sugar cravings”, Bipasha captioned the video. We could see her finishing off the whole jalebi bite by bite, and we were drooling. Jalebi is one of the most popular Indian sweets. Crispy and hot, this dessert, in fact, also comes with an interesting back story. It was introduced to us by the Persian travellers who came to India in the 10th Century. Historical records - like the Kitaab-al-Tabeekh - find mention of something called ‘zalabiya’. Eventually, the name ‘jalebi’ was given to this heavenly dessert. The utterly sweet treat has many lovers around the world. It also garnered global recognition officially when it made it to the ‘50 Best Street Foods of Asia’ list, along with vada pav. Now, isn’t that amazing!

Wondering if you can make this at home or not? Well, of course, you can. Here’s a quick and easy jalebi recipe you can try at home. You can pair it with poha, like how they eat in Bhopal or go the Bihari way and pair it with kachori. However, if you ask us, we think the best way to enjoy this sinful dessert is with some thick and creamy rabri.