Lip smacking crispy side dish for a great appetizer Anyone who hasn't tried fried brinjals will find it challenging to describe the flavour of began bhaja. Just know that it's probably unlike anything you've ever tasted, especially if it's properly salted and sugared. And you won't even mention how absolutely stunning the result is. Thickly sliced brinjal is fried in a skillet over medium heat with turmeric and salt. The sweetness of the marinade gives the brinjals a beautiful amber colour and intensifies the flavour of the dish. Try this dish if you have 20 minutes to spare. You won't regret it if you eat it with hot rice and dal.

Brinjal has been around since prehistoric times in India. Only long later was the brinjal introduced to the Western world. The incredible cultural heritage of India has left a long-lasting mark on knowledge repositories that cover a wide range of topics, from the great Indian epics to treatises on sex like the Kamsutra and on cuisine like the Pak Shastra. The ancient Indian cookbook Pak Shastra mentions the brinjal and includes recipes for it. The brinjal is usually thought to have originated in India before progressively spreading to other parts of the world.

Begun Bhaja, often referred to as Baingan Bhaja, are wonderful crispy and tender eggplant fries that are great as a side dish, appetiser, or snack. 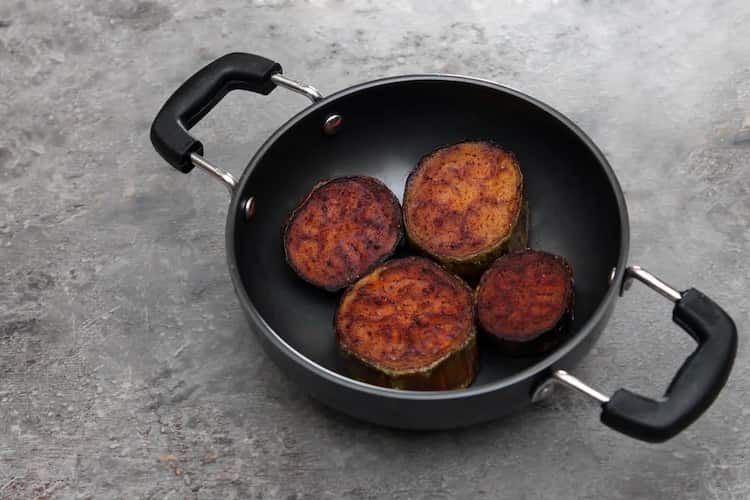 To remove the stem, wash the brinjal. To create 2-cm-thick discs, slice the vegetable crosswise. In general, a large brinjal should produce 6 slices.

Combine the salt, sugar, atta, red chilli powder, turmeric powder, and them in a mixing bowl.

Add the brinjal slices to the bowl and coat them with the spices.

For at least 15 minutes, cover them and allow them to relax. The brinjal slices will become softer during this time as the salt and sugar pull the water out of them. The moisture produced will also aid in a harmonious blending of flavours. Don't omit this step, then.

One by one, lower the marinated brinjal slices into the oil and cook them for about 3 minutes on each side, or until golden. As we want to cook the brinjal slices from the inside out while allowing them to form a wonderful crust on the outside, make sure the heat is set to medium-low. As the sugar in the marinade may burn, keep a tight eye on the pan as well.

Lift the started bhaja from the oil when it is golden. To drain excess oil, hold them on the pan's side for about 20 seconds, or dab it with paper towels. Serve hot.

Brinjal was brought from India via Persia to the African continent, and the Arabs brought it to Spain. The simple vegetable with a crown made its way from Spain to the rest of Europe before slowly spreading to the rest of the world.