If you have been following the actress on social media, you would know how she is probably one of the biggest foodie celebrities from B-Town. Don’t we all love to snack in between work? If you ask me, snacking in between work also keeps me going through the day. Snacking is a habit that food lovers just can’t get rid of. Foodies will agree that a day isn’t just about three major meals, but even the smaller meals in between, isn’t it? Whether it is a quick savoury bite or a sugary treat, snacking can include all kinds of foods. And it seems Kareena Kapoor Khan agreed with us too, as she was spotted enjoying a delicious snack in the afternoon hours. The Bollywood star is known to be a foodie, who is often seen indulging in many delicious treats. But this time around, rather than the usual unhealthy treats, Kareena chose to eat something nutritious instead in between reading her lines for one of her upcoming projects. The actress shared a glimpse of her snack on Instagram stories, and it was all about eating colourful and healthy. Take a look: 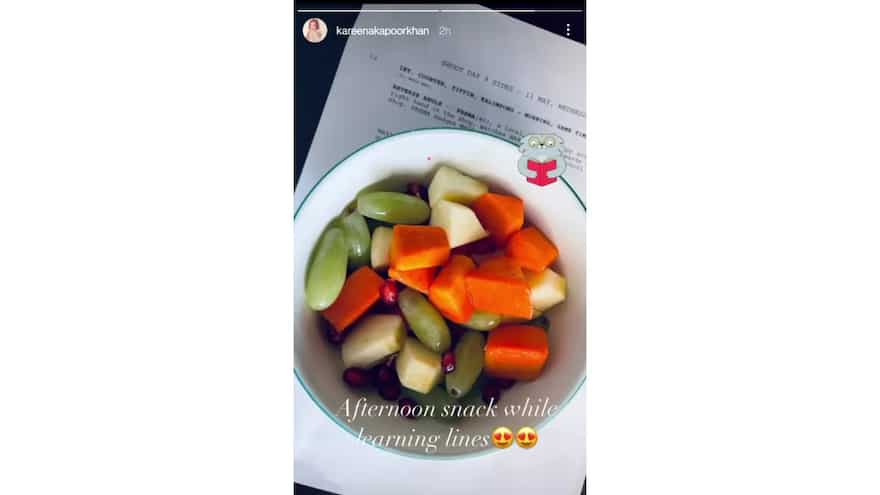 In the click, we could see a bowl of delicious fresh cut fruits that were being enjoyed by Kareena. We could see papaya cubes, green grapes, apples and pomegranate in the healthy bowl, which looked all things summery. Many health experts and dietitians often tell us that our plate should have all colours, and it seems like the actress knows it quite well. In the picture we could also see a script in the background of the bowl. "Afternoon snack while learning lines", wrote Kareena in the story.

If you have been following the actress on social media, you would know how she is probably one of the biggest foodie celebrities from B-Town. She regularly shares captures from her food diaries every now and then, and shares them with her fans and followers. From biryani feast to festive treats, Kareena is seen relishing it all. Even her friends from the industry regularly treat her to good food, as they know how much she enjoys it. Recently, Kareena was sent over some delicious mathri by her close friend, designer Masaba Gupta. Read more about it here.

On the work front, Kareena has begun the promotions for her new film ‘Lal Singh Chaddha’, in which she is starring opposite Aamir Khan. Earlier the film was slated for a Baisakhi 2022 release but got pushed to August 11, 2022. Kareena will also be making her OTT debut with the adaptation of Keigo Higashino's novel, the Devotion of Suspect X.

Kareena Kapoor Is Craving Bengali Bhog Khichdi, Here’s How You Can Make It At Home