Hyderabadi Chicken Dum Biryani: A Sumptuous Dish You Must Try No matter what comes and goes, when you talk about a spoiling and lavish rice and chicken meal, it's always going to be Biryani. And on top of it, is Hyderabadi Chicken Dum Biryani whose mere sight leaves one drooling. This Biryani is a legacy in itself, surfeit with gripping aroma and flavours of whole spices at every step of the preparation starting from marinating chicken to preparing rice. This Biryani is also known for being cooked by the dum-pukht technique where chicken pieces are richly marinated with whole spices, powdered spices, fried onions, herbs, oil and curd. Some care and attention go into layering the rice on top of the chicken as it's layered in order of being cooked least to the most from the bottom-most layer.

The sumptuous and eclectic mix of beautiful spices enriched Hyderabadi Biryani or Kacchi Biryani has cultural elements of both Mughal cuisine of the 1630s and Nizam’s cuisine which ruled from the 18th-20th century. According to one legend, the chef of Nizam-ul-Mulk, Asaf Jah I, is said to have created the Hyderabadi biryani. 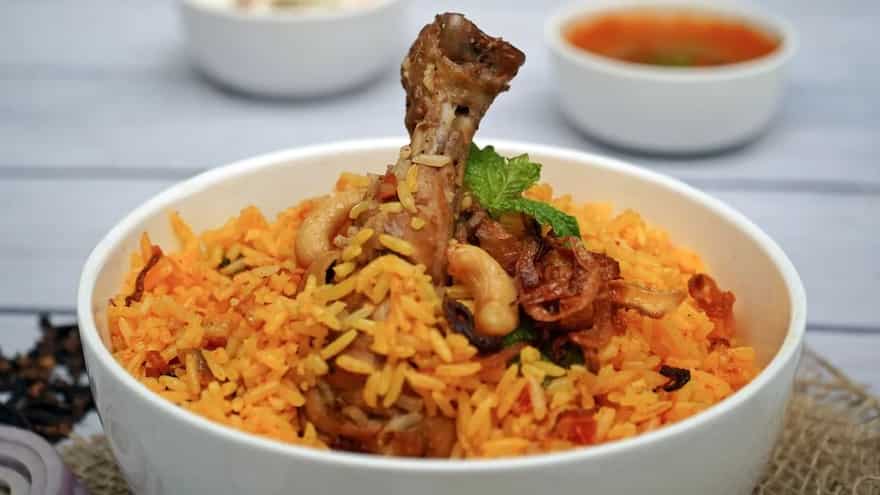 This Biryani is traditionally prepared with raw meat or kachi gosht of lamb or chicken, and is marinated with spices overnight and then soaked in curd (dahi) before cooking. The meat is layered at the bottom-most of the vessel with several layers of aromatic basmati rice. Then this Biryani is cooked ‘in dum’ on slow heat after tightly covering the vessel with dough.

For marinating the chicken:

Open the lid after 45 minutes, and serve hot.