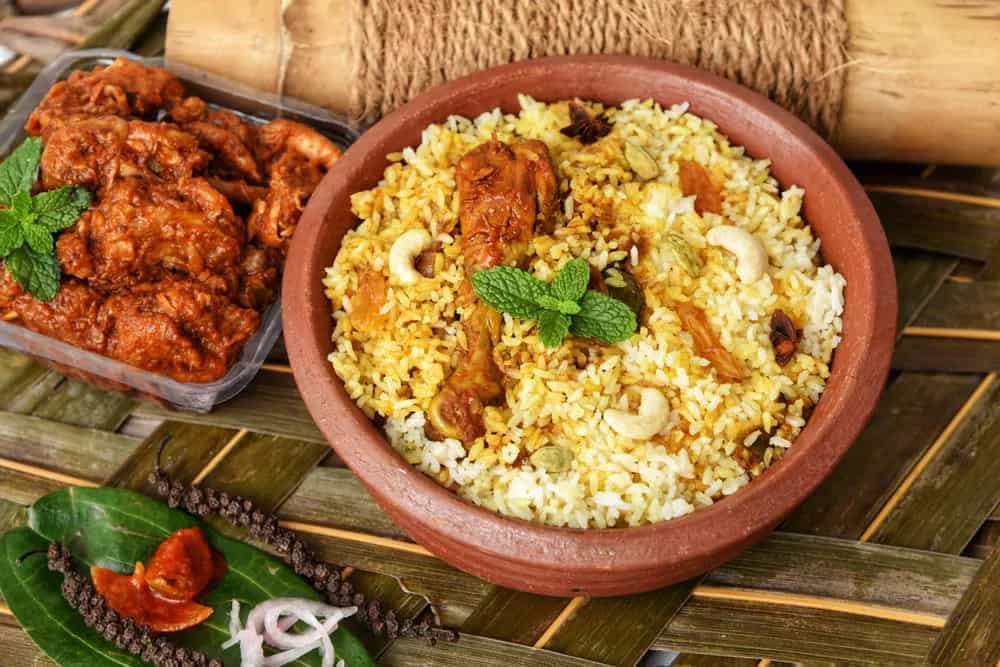 An ardent Chicken Biryani fan looking for a Biryani that is easy to cook and finger-licking in taste? Jump onto Kerala-style Pot Chicken Biryani regionally called Kalam Biryani. The opulent Biryani ups the game with some beautiful infusions including tempering of marinated and coconut oil-cooked chicken with fried onions and the rich toppings of ghee-fried cashews and raisins. The green chilli and garlic-ginger paste added to the simple chicken marinade of garam masala, turmeric powder, lemon juice and chicken pieces set an appropriate ground for juicy and spices-imbued chicken. The best part is that it does not require multiple layering, and both nearly-cooked chicken and rice are steam-cooked together in one pot to infuse the flavours seamlessly into one Biryani. Biryani has covered a chequered journey from being known as a military dish to becoming a royal cuisine. Of the many legends around Biryani, the earliest is famously associated with Turk-Mongol conqueror, Timur who is said to have brought the biryani's precursor when he arrived at the frontiers of India in 1398. The other story of the dish being brought to the southern Malabar coast of India by Arab traders is equally interesting. The most popular and widely believed legend says that Biryani was born when Mumtaz Mahal ordered the chefs to prepare a special dish that combined meat and rice to provide balanced nutrition to the soldiers.

Biryani has proliferated into numerous local and hyperlocal varieties in India. Some broad differentiation in the north and South Indian Biryanis are the use of long grain brown rice in the north while local varieties of rice, like the basmati, zeera samba, jeerakasala and kala bhaat, used in the South. Another prominent distinction is in the cooking method of Kutchi biryani where the meat is layered with raw rice in a pot and cooked, and Pukki biryani where cooked meat and rice are layered in the hand. The Kerala Biryani is characterised by the unique variety of rice called khyma rice, the rich flavour of spices, and the generous dose of cashew nuts and raisins. The other variations include Mughlai Biryani, Hyderabadi Biryani, Calcutta Biryani, Dindigul Biryani and Lucknowi Biryani.

Kalam Biryani with great flavours and satiety levels is worth a try. It is especially for those finding layering of rice and cooked chicken a bit of a task. Since this one requires you to do one layering each of chicken and rice and cooking everything together in the water-infused with whole spices.

Spice Up Your Egg Rice With This Kerala Recipe