How To Use A Moroccan Tagine To Make Stew

A pot, serving dish and sculpture all in one? We’re in! If you’ve ever been to an African or Middle-Eastern restaurant you might have seen a variety of conical clay dishes moving around the room. Beautifully painted and elegantly shaped, these eye-catching numbers are called tagines and they’re an integral part of Moroccan cusine. Traditionally made of clay or ceramic the shape creates a uniquely moist, hot environment for the dish to be cooked in over an open fire. Thanks to the wide shallow base and conical chimney, the steam rises gets trapped on the inner edges of the cone, condenses and trickles back down to create a delicious stew. It was a practical choice for the climate where water was not readily available, and with this method, every spare drop was put to good use.

This brings us to the second meaning of the word tagine, the dish itself. The slow-cooked stew is typically meat-based with poultry fish or lamb with additional vegetables and a ton of rich, warming spices like harissa and raas al hanout. Vegetarian versions of a tagine exist too, but they’re not as common since the slow-cooking process usually lends itself better to meats.

The origin of the tagine dates back to the Islamic Empire of the late 8th century under the rule of Harun Al Rashid. The first written mention can be found in the beloved collection of stories The Thousand and One Nights. Some people believe that the true origin predates Al Rashid however, going all the way back to Roman influence and the mark they made on Morocco during their occupation of North Africa.

Today, tagines are more of a decorative kitchen addition than a practical choice since we have many other implements that can replicate the moisture control of a tagine. These days they’re more often used for serving than cooking but if you want to bake your tagine or use it (with a protective layer in between) on the stovetop, it makes for a wonderful homage to this unique and nuanced dish. 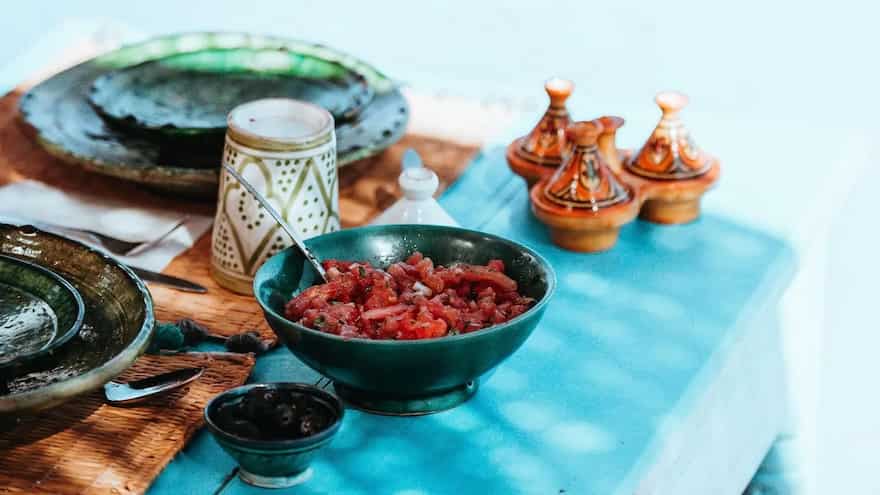