Handcart To Restaurant - The Rise Of Raju Malvani Mejwan They say success comes to those who wait and there’s nobody who knows how true that is better than Narendra Sawant, owner of Raju’s Malvani Cart and Mejwan. It was 1986 when Narendra first set up a small cart in the by-lanes of Dadar, Mumbai just on the corner near Shivaji Park, and started doling out food to hungry passersby. Sizzling fish fry, bowls of Kombdi chicken curry with puffed vades hot from the kadhai. The choreographed movements of the chefs, built on years of experience come together in a perfect ballet to bring you a taste of something special.

The street is home to many Malvani eateries, but since its inception, his cart became a hotspot activity, packed from the moment they rolled up at 7.30 and almost always sold out by 9. The secret, he says, is his mother. The masalas he uses in his delectable dishes are identical to the ones she used to make in their hometown of Sawantwadi and people come from all over the city to sample a slice of this authenticity. 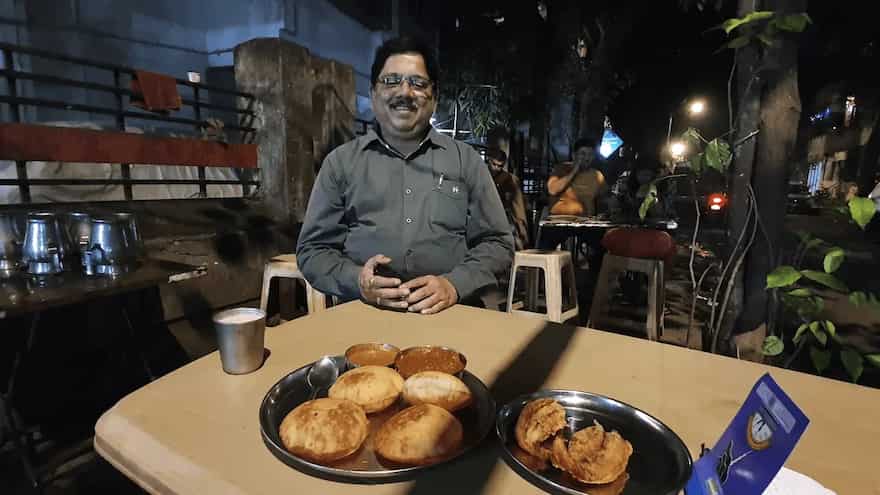 It was a commitment to quality and flavour that eventually allowed him to open a small restaurant space in 2020 – a mere 100 feet from the original spot of his cart – where you can relish the same recipes in air-conditioned comfort. He still credits his mother for this achievement, telling stories about how she used to cook all the food by hand and bring it to the cart in the old days and how difficult he found it to take over after her death. His family’s legacy is woven into every inch of the business including the name. The name ‘Raju’ was her nickname for Narendra and the touching endearment adorns the new restaurant in bright lights for all to see.

Their menu may not span multiple cuisines or be graced by the most trendy ‘fusion’ items like so many other Mumbai establishments, but as soon as you sit down at a table and catch a waft of the hand-pounded masalas escaping the kitchen, it won’t concern you. In true coastal style, seafood is the star of the show. Narendra will proudly recommend the Crab Lollipop with its crisp crumb coating and soft juicy centre, which are a great way to start the show. The thalis are where it's at for the main meal with versions in bombil, rawas, pomfret, prawn…a fish for any season. Or if you’re less of a foodie, go back to basics with the Kombdi Vade that is their claim to fame and where his mother’s secret recipe really shines through.

For decades this small Mumbai institution has overseen the creation of authentic Malvani flavours and tradition with care and understanding. They have made the journey from curbside to a restaurant built only on the quality and consistency of their offerings. In a city that has no space for the old and unwanted, they have made a niche for themselves and persevered through hard times to find success.

From Dhondas To Khaproli, The Malvani Cuisine Boasts Of These Five Delicious Dishes

How About Some Malvani Chicken Fry By Chef Mohit?