Ginger: How One Of India’s Favorite Spices Came From China

Did you know that ginger, which is related to turmeric and cardamom, has been used for thousands of years in southern China. Historically speaking, the root has been utilized for both culinary and medicinal purposes in China and India since at least 500 BCE India is the world’s third-largest producer of ginger. In 2016, India produced almost 30% of the world’s supply of ginger. But did you know that ginger originally came to India from China? There is a concise history behind when and how ginger came to be so popular in India as well as other regions with significant Asian populations.

The name "ginger" may have been derived from the Dravidian word "inchiver," which eventually became Old French "gingibre," or from the Sanskrit meaning "horn body" (describing the shape of the root), "sringavera." It is known as adrak in Hindi.

Ginger is a rhizome – a root-like stem used in cooking. The rhizomes are harvested while they are still young and can be eaten fresh or dried and ground into a powder. Fresh ginger has a bright, in-your-face kind of taste when mashed, while dried ginger is more fragrant and sweeter. Ginger is a common ingredient in Asian and Indian cuisine, where it is often used in curries and stir-fries. Ginger also finds a place in many health and wellness products. It is known to boost the immune system and help with an upset stomach. 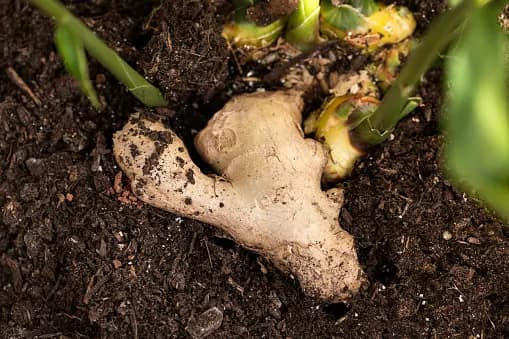 Ginger originated in Southeast Asia (particularly southern China) where it was cultivated and used as both a spice and a healing herb. Confucius, the famous Chinese philosopher, is credited with making the earliest documented mention of ginger in China around 500 BCE. He said he mentioned in his books ‘the Analects’ that he never ate a meal without ginger.  Ginger was limited largely to China until the 12th century, when traders from the Indian Ocean began visiting China. Chinese ginger was brought to the Indian Ocean by traders who took it to the southern Indian port of what is now Kerala. These traders then bartered their ginger with Indian traders who shipped it to China. This was how ginger made its way to India from China. Indian traders transported the spice by using it as payment for services such as transporting passengers. The arc of harbours from Zayton (Quanzhou) - the city of olives in China, across Southeast Asia, and into Ceylon (now Sri Lanka) may have been the initial point of entry for this spice into global trade networks. Dried ginger was exported from India to Arabia and ultimately Egypt, some time after Confucius made his observation. The use of ginger as a common spice in Indian cuisine a goes back centuries. The earliest record of ginger in India comes from the Ramayana – the Indian mythological poem that is estimated by some historians to have been composed in the 5th or 4th century BCE. The poem mentions a king who gifted Lord Rama with the “best and most valuable spices including ginger.”

It's not hard to find an application for ginger because it's so versatile. Its most useful as a seasoning in cooking. Juicy and meaty when young, it is commonly eaten as a snack after being pickled in vinegar or sherry. Pieces of the root can be soaked in hot water, strained and blended with honey to make a delicious tea. I mean, who doesn’t love a piping hot cup of adrak chai? Fermenting it with raisins and fortifying it with brandy, helps turn it into a very nice wine. Ginger, when allowed to dry out, can be ground into a powder and used as a spice or as an ingredient in foods like gingerbread, cookies, crackers, cakes, ginger ale, and ginger beer. Ginger is also a favored ingredient in Indian pickles.

Ginger has a unique history that spans large swathes of the world. It is important to learn about how one spice can be so commonly used in different cultures. This makes us more aware of the diverse nature of the world and how one region’s culture can be greatly influenced by another.

Benefits Of Having Ginger Carrot Soup In Winters