Made with aromatic rice, layered with vegetables and served with garlic-flavoured yoghurt. this biryani is sure to be the talking point of the feast. With more and more people moving towards veganism around the world, one can always give their own spin to our typical festive delicacies like biryani. Your korma can taste just as delicious with chunks of soya, your biryani just as tempting with pieces of fresh veggies and paneer, in place of mutton.

Also Read: This Khatti Dal Is Proof That Hyderabad Veg Fare Is Just As Good

We know, we know, the ‘traditionalists’ would be shaking their heads in disbelief now that we mentioned ‘veg biryani’. But did you know the word ‘biryani’ originated from birinj, the Persian word for rice. Another theory states that it is derived from biryan or beriyan, which means ‘to fry’ or ‘to roast’. Even though the authentic biryani recipe included meat, there is no rule that meat is necessary for the recipe. So, this Eid, we have brought you a delicious veg Awadhi Biryani recipe by MasterChef India Pankaj Bhadouria. 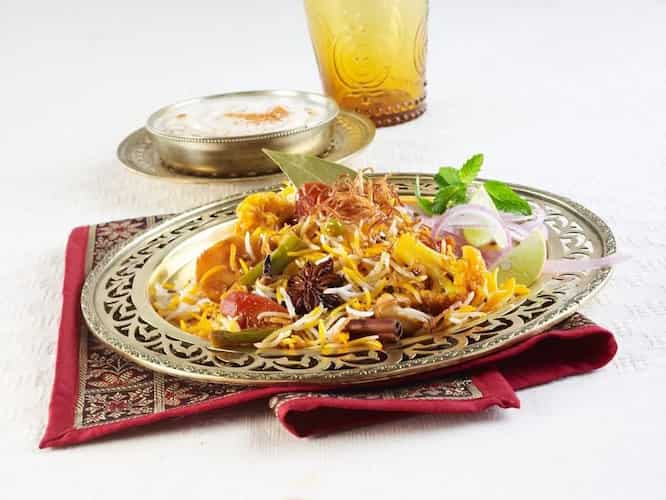 Made with aromatic rice, layered with vegetables and served with garlic-flavoured yoghurt. This epic biryani recipe will unite both meat and non-meat lovers. So, without further ado, here’s the recipe you were waiting for.