Eggplant: A Mainstay In Turkish Foods 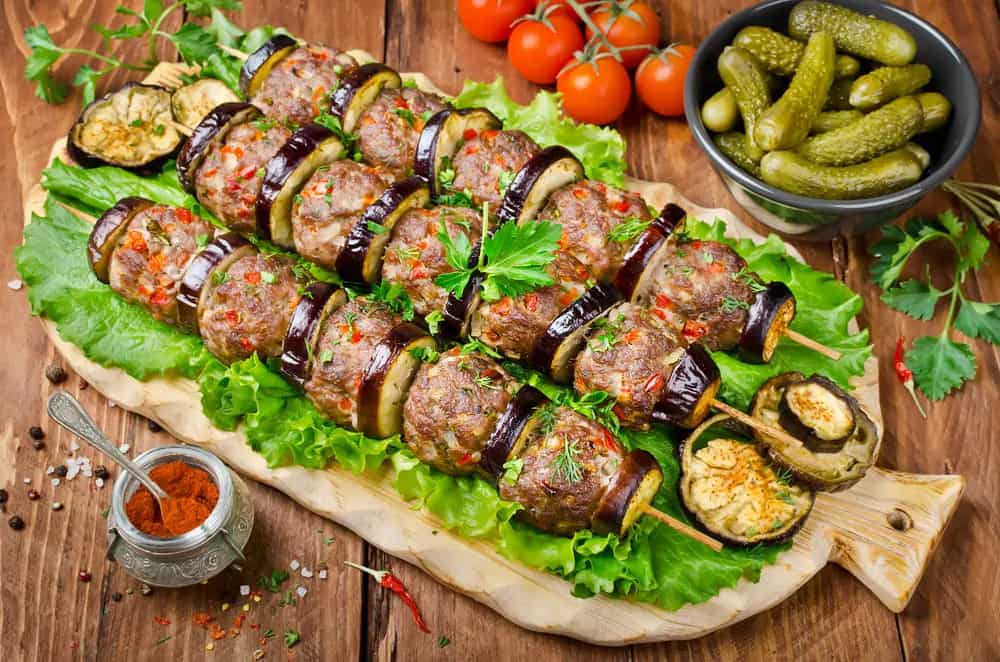 For those who are unfamiliar with Mediterranean and Middle Eastern cuisine, the eggplant can seem like a weird, black vegetable. The culinary tradition of Turkey, however, is a combination of the various other cultures that have long been the minority populations in the nation or whose cuisine has had a significant influence. The variety of mouthwatering eggplant meals available in Turkey is generally regarded as one of the country's top dining attractions. As a result, we have translated the mysterious names of the cuisine's most well-known eggplant dishes and created a guide on this Turkish kitchen mainstay.

The most well-known eggplant dish in Turkish cooking, Karnyark, can be eaten as a main meal if it is served with rice and a dollop of yoghurt on the side. The main ingredient in the recipe is ground lamb meat, which is combined with diced tomatoes, green pepper, parsley, tomato and red pepper sauce, onions, minced garlic, and a roasted entire eggplant that has been split along the centre.

With the exception of the addition of meat, Imam bayld is essentially the same dish. This recipe is fully vegetarian, served at room temperature, and uses more olive oil than usual.

Kzartma is without a doubt the eggplant dish that is most readily available in Turkey. The name simply describes how the veggies are prepared, which is usually a combination of potatoes, peppers, and eggplant and involves slicing and frying. It can be eaten cold and is typically accompanied by a scoop of plain or garlic-flavored yoghurt. A similar meal known as Yourtlama may be found in the Aegean region; however, in this instance, yoghurt is added on top of the fried veggies along with a rich tomato and pepper greasy sauce.

Hünkar begendi is unquestionably the fanciest eggplant meal in Turkey and has been a staple since the Ottoman era. It is a major dish in which cubed beef is arranged over a bed of smoked and pureed eggplant that has been thickened with bechamel sauce. Another kind is Alinazik, where the bed of eggplant is made of pureed smoked pulp, crushed garlic, and yoghurt, and is decorated with cubes of meat.

Round slices of eggplant are stacked between spicy ground beef patties in the Turkish meal called Patlcan kebab, which also features eggplant. The dish is then grilled over an open flame. The Islim kebab uses a similarly spiced ground pork patty that is baked in a bundle with long, thin slices of eggplant. Even while Turkey has a meal named Musakka, it might be very different from its Greek and Middle Eastern equivalents. Musakka, a dish popular in Turkey, is essentially ground meat and vegetable ratatouille. Finding variants with layers of bechamel and melted cheese is uncommon but not unheard of.

When served as mezes at picnics, potlucks, and celebrations, Turkish cuisine's eggplant dishes really shine. Turkish simply refers to this dish as patlıcan salatası, which translates to "eggplant salad," and refers to the mixture of diced smoked eggplant, roasted red peppers, onions, and garlic in a dressing of olive oil and lemon juice.

Another well-known dip-like meal is Yoğurtlu patlıcan, which is only smoked eggplant blended with yoghurt and garlic yet has an absolutely wonderful flavour. The term "mütebbel," most well known as a Middle Eastern eggplant dip, is created by adding tahini to the mixture.

Although the Middle Eastern version of baba ghanoush also contains tahini, the meal known as babaganuş in Turkey has a Turkish twist and is made up of diced smoked eggplant that has been smoked, tomato and pepper pastes, finely diced tomatoes, red and green peppers, onions, and garlic.

One of those mezes is shakşuka, which can be found practically anywhere mezes are offered. Thankfully, köpolu is a mixture of the same meticulously sliced and fried veggies, but in this case, they are covered with a sauce of garlic yoghurt. It is a delicious blend of fried cubed eggplant, potatoes, and peppers in an oily tomato-based sauce.

Bharli Vangi: A Spicy Lunch Dish That Will Make You Love Eggplants