Diljit has been a regular social media user, and has spilled many foodie secrets about him that are just so relatable Known for his films and music, Diljit Dosanjh has earned quite the name in the entertainment industry. But that’s not all. The actor-singer is a hard-core foodie too, and often shares videos of him cooking and noshing on some of his favourite foods at home. And so, his 13.9 million followers on Instagram often gets treated to his foodie adventures. Recently, he revealed what his preferred tea time snack is - it is a secret that you will understand ‘if you know, you know’. He shared an image on his Instagram stories. Take a look: 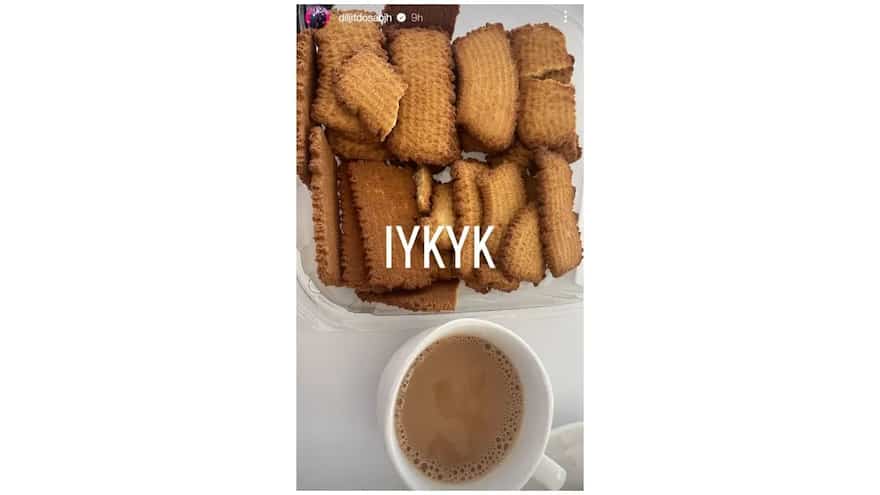 In the picture, we could see a container full of biscuits along with a cup of chai. And no, they weren't any usual biscuits. They were our very own atta biscuits that have been a staple in Indian homes. We'd often find these at our local grocery store and enjoy it by dunking it in our tea. No wonder, Diljit wrote, “ifykyk”, in the image, slyly letting his followers know about this snack without telling them what it is, because true foodies will definitely relate with the snack.

Now that is some serious foodie goals right there. And this makes us wonder how Diljit, despite being a star, is just like us in real life. This isn’t the first time he has made us realise this though. Diljit has been a regular social media user, and has spilled many such foodie secrets about him that are just so relatable. From his poha breakfast to cooking Maggi, we’ve seen them all. Here’s looking at some foodie secrets of the actor-singer.

Diljit’s secret behind staying fit despite being a food lover lies in him always maintaining a fine balance between fitness and indulgence. He eats everything, but in moderation and healthily. Recently, Diljit shared a story of his healthy breakfast which was served in a measuring cup. The breakfast consisted of oatmeal made with milk and oats. Diljit revealed that he has around 300 millilitres of milk and oats for breakfast. Interesting, isn’t it?

A true-blue Punjabi, Diljit’s heart lies in the cuisine. And his social media feed is enough proof of that. Right from enjoying a staple plate of Sarson Ka Saag with Makke Ki Roti to indulging in the decadence of Pinni Ke Laddoo, Diljit loves devouring food from his pind, and also shares it on his social media. In fact, the singer once shared a monologue in one of his interviews where he spoke about how his day starts with food and ends with food.

For those who don’t know, Diljit not only loves eating but loves to cook too. If you follow him on social media, you would have come across videos of him cooking up a storm in his kitchen. From the Punjabi-style pasta to classic bhindi masala, Diljit entertains his followers with a live commentary of his recipe, which makes the videos even more fun to watch.