Chilli Oil In The House: 5 Tips And Tricks To Make It Aromatic

If you’ve got chillies, we’ve got oil. Let’s make something yummy with it. I remember this time, last year, chilli oil had become quite a sensation. With the craze for the Korean boy band, BTS and the widespread fanfare of K-dramas in the country, people had become very inquisitive about Korean culture too. While a lot of Korean phrases and lingos were picked up by these ardent fans like Saranghae, they were quite quick to capture the eating habits of these people too. During various shows, people are seen slurping on a bowl of rice called bibimbap and dipping the Korean version of sushi called kimbap in soy sauce. These captivated the imagination of several fans and they started searching for Korean places to eat.

Well, I’m unapologetically guilty of it too. Along with kimbap and bibimbap, I also tried mandu which is nothing but Korean dumplings. While these dishes might be a hassle to cook at home with special ingredients, it is the chilli oil noodles which seemed super easy. All you have to do is toss your boiled noodles in chilli oil and voila! It’s done. With so many people were trying these trending noodles on social media, it tempted me to try them too.

I made the chilli oil, step by step, following a recipe but the flavours didn’t seem to satiate my taste buds. That’s when I realized that I had done something wrong. In case you are planning to try chilli noodles at home too, here are some tips and tricks that are going to make you want to have these noodles again and again.

The best chillies for the chilli oil would be the Asian variety. Simply take the dried red chillies and grind them till they form flakes. These flakes work perfectly well for making spicy chilli oil. You can experiment with other chilli varieties if you want a subtle or a spicier version.

To the bowl of chilli peppers, garlic and salt, always add pre-heated oil. However, be careful not to overheat the oil because that will simply burn your chillis. Ensure that you use neutral flavour oil like canola so that it doesn’t overpower the flavour of chilli.

This might seem like a very basic tip but is really essential. While pouring the oil, make sure the bowl with the chilli flakes is a large one. A small bowl increases chances of spillage since the oil is hot.

While chillies should dominate the chilli oil flavour, yet there are some other spices that can be added to the oil to enhance the taste. These could range from cinnamon to garlic, star anise and peppercorns. 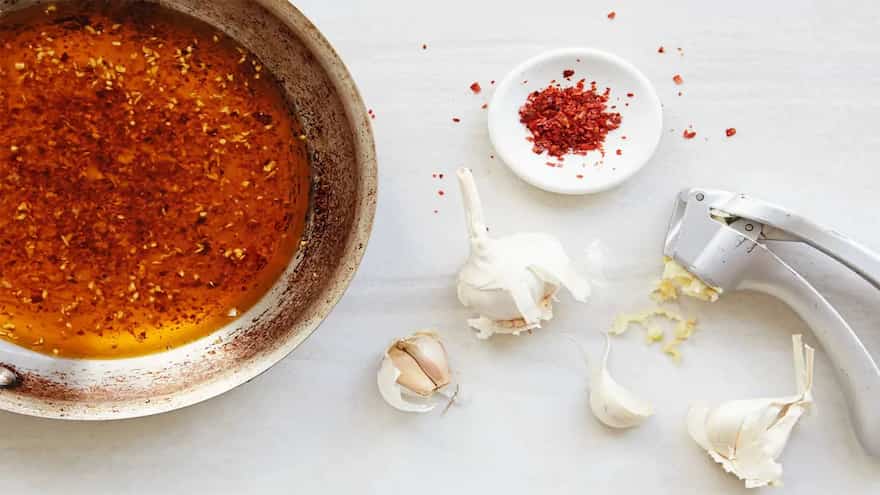 The other spices added can be strained before pouring on to the chilli flakes or you could pour them as it is. After straining, ensure that the jar that you are using to store it has been sterilized and is dry.