Mesmerising chicken and Lebanese bread treat made with utmost diligence Shawarma needs no introduction and is an absolute craze both worldwide and in contemporary India. So much so that it feels like an indispensable dish. But few have tried the original Lebanese Shawarma at home. In it, the chicken pieces are soaked overnight in a richly-spiced mixture of a dozen powdered spices or in all-in-one traditional baharat spice, salt, yoghurt and tomato paste to get extremely flavoursome and juicy chicken pieces.

Skewering could easily be called the difficult part of making Shawarmas but can be managed with some patience and determination to make home-cooked delicacies. Last, but not least, soft foldable Lebanese bread is the showstopper that takes care of both presentability and enhanced taste, besides the locally made Toum sauce and chilli sauce.

The Levantine finger dish, Shawarma has an eclectic past just like its name which is an Arabic rendering of the Turkish word, which means the rotating rotisserie. The name has a direct relation to its history and its Turkish origin. Shawarma was born in the 19th century Turkey ruled by the Ottomans, in the form of doner kebabs. The Shawarma technique involves roasting meat slowly, turning vertical stacks and slicing it off in cone-like shapes as it gets cooked. Originally the dish used to be made of lamb, veal and turkey. Now it's popularly made of chicken. The grilled chicken pieces in Shawarma are accompanied by onions, tomato and capsicum with Toum sauce or mayonnaise as an alternative.

The character of Shawarma naturally makes it a very popular and likeable street food across the world, especially in Levantine countries including Egypt, Iraq, Turkey, Lebanon and the rest of the middle east. And so it's called a Levantine dish. The traditional all-in-one spice Baharat seasoning used in Shawarma is worth mentioning for its close resemblance to Indian garam masala. The Baharat seasoning is a staple in Eastern Mediterranean cooking and is a warm spice blend that typically includes black pepper, cardamom, cloves, cumin, nutmeg, coriander and paprika. 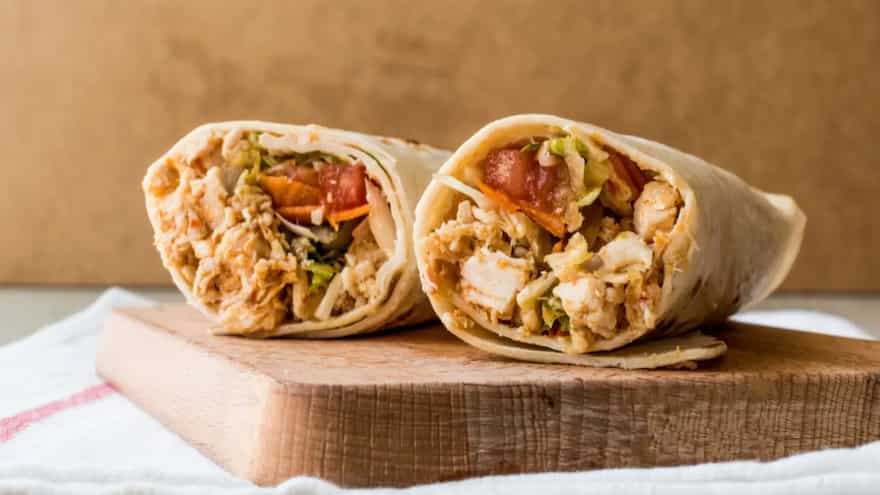 2.    Then in a pestle and mortar, crush the bay leaves using, then add the remaining powdered spices and mix all well.

4.    Mix everything well into a fine paste, add the chicken pieces and leave in the fridge overnight for marination.

7.    Line a baking sheet with foil, then place the skewers on the edge of the sheet. They should be floating above the sheet and not touching it.

9.    Place them back in the oven for 2-3 more minutes until slightly charred.

10.    Now for making a Shawarma sandwich, take a piece of Lebanese bread, and slather it with Toum or garlic sauce.

11.    Then add the chicken pieces on top, chilli sauce and pieces of pickled cucumbers.

13.    Place the sandwiches in a grill pan or griddle, and weigh them down with something heavy. Allow them to sear for 30-60 seconds per side until grill marks form.

Make yourself extremely proud of your culinary expertise by making this authentic Lebanese Shawarma at home. Some attention needs to be given while pounding the chicken pieces and piercing and arranging them in skewers tactfully.

Best Shawarma Places In Mumbai You Must Try!