Cassoulet: What Makes This French Dish So Controversial?

An iconic dish that’s full to the brim with history, mystery and beans. If there’s one country where you shouldn’t mess around when it comes to food. It’s France. The European nation is renowned for the care, love and skill that they lavish over every single morsel. With that reputation comes fierce territorialism, especially when it comes to the classics, and while you may imagine this means elite epicureans arguing over Michelin-starred dishes, it’s actually a rustic farmer’s dish of Cassoulet that is often the most hotly debated.

This cherished dish was originally the fare of peasants in southwest France, and all the ingredients were chosen accordingly. A simple assembly of whatever was available from sausages and meat scraps to white beans and gizzards, slowly cooked into a hot and flavourful stew; everything was fair game for a Cassoulet. As it was a dish of necessity, the standard recipe changed from town to town, depending on what each area specialised in and what the land would provide and that has left a lot of doubt regarding what the true Cassoulet should look like.

It’s believed that the first Cassoulet came from the city of Castelnaudary in the 1300s while it was under siege by the Black Prince, Edward the Prince of Wales. The inundated townsfolk gathered up the few ingredients they had to spare and made a stew to feed and sustain their soldiers. The result was so hearty and fortifying that the troops quickly dispelled the invaders and saved the city. Unfortunately, the true story is probably not quite as exciting since the etymology suggests more exotic origins for the stew such as Arab and Catalonian influences from across the borders.

The word Cassoulet derives from the earthen casserole (or cassolle in the old French) in which it’s cooked which comes from the local potteries from Issel near Castelnaudary. The root word cassalo in turn comes from the Spanish cassa meaning ‘a pot that holds liquid. This is where opinions differ, some attributing it to Greek and others to Mozarab – a language spoken by Christians in 12th Century Islamic Spain and deriving from the Arabic qascat meaning a shallow bowl or pan. 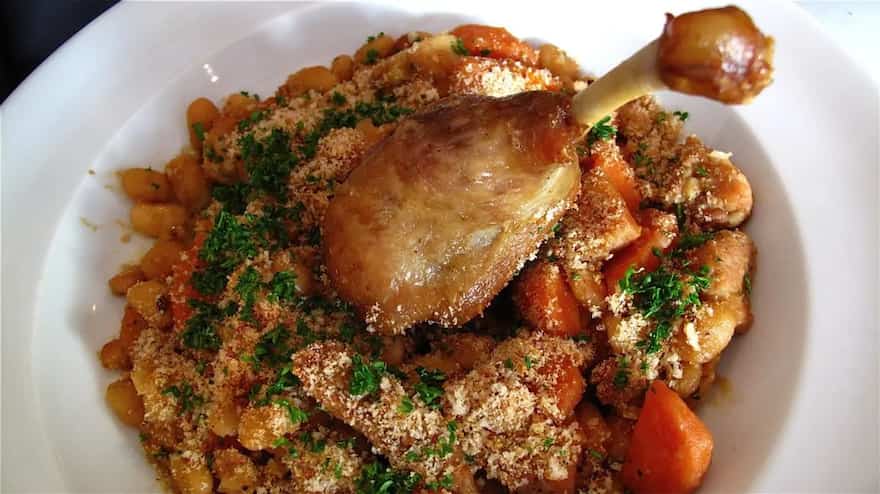 Wherever it came from, it soon became a staple of French cuisine with the Castelnaudry version being the more rustic and using only locally sourced ingredients. Other versions such as the Carcassonnais were a little more indulgent and during the hunting season, they would be enriched with goose confit, pork skin and Toulouse sausages.

One line that emphasises the importance of Cassoulet to each region’s national pride is the famous saying ‘Cassoulet is the God of Occitan cuisine. A god in three persons: God, the father, is that of Castelnaudry. God the son is that of Carcassonne, and the Holy Spirit is that of Toulouse’. In fact, it has become so much a symbol of the holy, that there is a brotherhood –  the Grande Confrérie du Cassoulet – that defends the honour and tests unsuspecting chefs on the authenticity of the dish as well as a Universal Acadamy of Cassoulet who are responsible for promoting the dish and its heritage.

Most will say that you can never eat a good cassoulet at a restaurant, that it can only be truly enjoyed in the home of a farmer. They also warn about the secret of the seven skins, when a film that develops over a cassoulet needs to be broken seven times in order for it to be perfect. A few more rules of thumb include that if you use the best local ingredients, hard calcareous water to keep the beans in shape and a lot of patience to cook it low and slow. Stick with these guidelines, and keep your fingers crossed that your dinner meets the exacting standards of the brotherhood.

When Cassoulet Was A Casual Affair: How A French Dish Moved Up The Social Ladder