All You Need To Know About Caramelised Onions

This deceptively simple process will be your new secret weapon in the kitchen. The secret weapon of professional chefs, caramelised onions are rich, and sweet and can elevate even the simplest dish into something gourmet. On top of burgers, alongside a steak, stirred through a dip or even on a pizza, they can be used anywhere and everywhere without worry. The only problem is, that they’re incredibly time-consuming to make. It’s very much a case of low and slow and it can take up to an hour to get onions to correctly release their sugars. With enough time they’re sure to turn into a meltingly soft, deep brown mass with a natural sweetness and smokiness.

To achieve this, there are two different chemical reactions at work. Caramelisation – where the sugars break down into hundreds of new molecules and the Maillard reaction binds the proteins and sugars into completely different flavour and aroma molecules. When both work in tandem, you get onions that are mild and packed with a unique flavour.

It seems simple enough, but there are plenty of opportunities to mess up, so here, we’ll be busting a few of the most common myths that come with the art of caramelising onions.

Can’t I just turn up the heat?

Unfortunately getting there requires a lot of patience and while there are some ways to speed up the process and even some 10-minute solutions out there, none are likely to taste as good as the real deal. If you get impatient and turn up the heat, you’re likely to just end up with a blackened bitter mass which isn’t helpful to anyone.

Does Baking Soda speed things up?

Some recipes recommend using baking soda as a hack to speed up the process. This works because the soda makes the onions more alkaline and in turn speeds up the chemical reactions at work but it also weakens the pectin that holds the onion's cells together meaning that rather than soft strands of onion, you’re more likely to get a goopy mush with a chemical flavour. 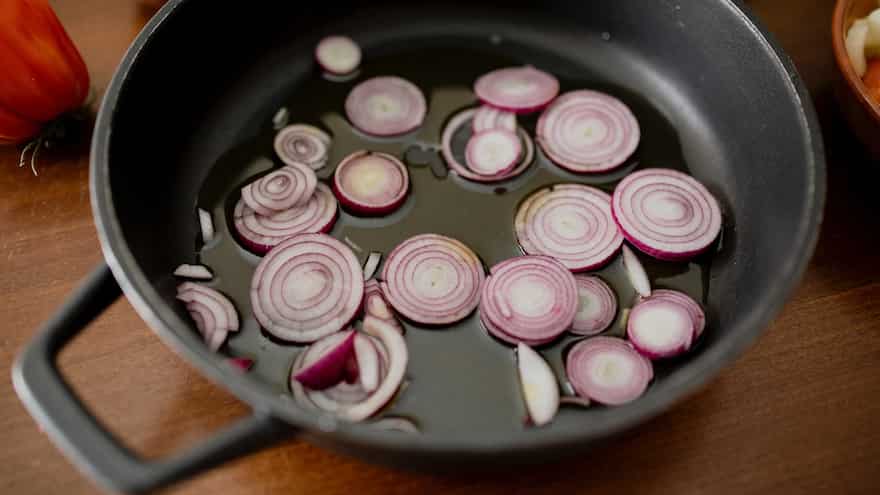 Will adding sugar help it caramelise?

Although it’s a logical step to think more sugar will equal more caramel, it could actually be counterproductive. The chemical process breaks down the sucrose within the onion cells into simpler forms of sugar such as glucose and fructose which are sweeter than sucrose. By adding actual sugar you’re just adding more sucrose which will also break down and result in onions that are way too sweet. So unless you’re using them in a dessert, probably skip the sugar.

Can they only be made on a stovetop?

If the idea of standing over a hot stove and stirring for an hour isn’t your thing, you can definitely put your onions into an oven at 190°C. You’ll still have to stir them occasionally but since they brown more slowly, you’ll be able to get some breathing room while they’re at work. The downside of this is that it takes much longer – probably 3-4 hours – to achieve the same results. If you’re looking to avoid the pan at all costs, try a pressure cooker or an instant pot where you run the risk of getting onions that are too wet but in a fraction of the time.

Does any fat work?

Yes! Butter, oil, and lard, all work just as well for caramelisation. The only difference is the flavour. As usual, butter would be your best bet for a rich taste since the milk solids help the browning process along better than oils and glazes the onions in the pan.

Now you know what not to do, you can try your hand at making your own caramelised onions to level up your cooking game.

All You Need To Know About Salamis

All You Need To Know About Baba Ganoush

All You Need To Know About Decaf Coffee

All You Need To Know About IIFYM Diet

All You Need To Know About Nutmeg

All You Need to Know About Food in Space!