From its presumed birth at the Don the Beachcomber restaurant in the US, the zombie cocktail has continued to numb people with its potency Legend has it that in the year 1934, at the famous Don the Beachcomber restaurant in Hollywood, a guy walked in. While sitting next to the bar counter, he kept complaining of a terrible hangover, and went on a rant on how he had to do some dealings in a critical business meeting. How would he do it with the persistent hangover?

The Zombie Is Born

Restaurant founder Donn Beach heard the hue and cry and decided to do something about it. He fixed a drink. Three potent rums went into the cocktail shaker, along with fruit punches of pomegranate, lime and grapefruit to mask the effect of alcohol. Angostura bitters and some more secret ingredients were added. The complainant was handed over the cocktail with a shoutout of ‘Cheers’. No one can tell how his business meeting went. However, a few days later, the man was back with another complaint to Donn Beach. He said the cocktail made him a zombie, quite literally the walking dead with no sense whatsoever, once it entered his bloodstream.

How much of this story is true is up for argument. But one thing is for sure: the birth of the zombie cocktail was around this time and it has since lived on.

Such was, and is, the potency of the zombie cocktail that Don the Beachcomber chain instructs its bartenders to serve only two of these drinks to their customers. As secretive as he was about his cocktail recipes, Donn Beach kept the original zombie recipe a carefully guarded mystery, and it is safely assumed that the zombie recipes that float around today have either been deliberate twists of the original by Donn Beach or are simply creations of other bartenders. Whatever be the case, the zombie shot to fame in the 1930s on the East Coast of the US, featuring in the New York World’s Fair in 1939. 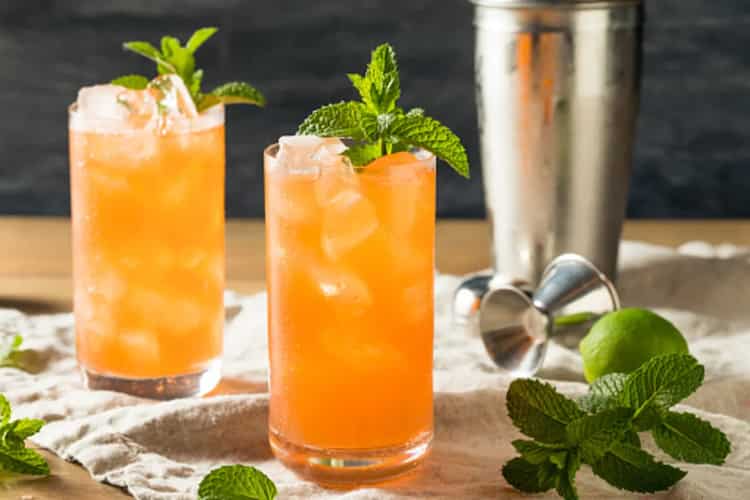 Zombie In The Tiki Culture

The zombie has since also been part of the tiki culture made popular with Māori motifs, Polynesian tradition of hula girls and torches, tiki god figures and huge masks. These were settings that romanticised the taste of the tropics and brought them inland to the cities. Zombie Hut and Zombie Village were some of the well-known tiki-themed establishments that pushed the popularity of the zombie even further.

The cocktail is itself considered a manifestation of the sun-kissed paridisal islands of Polynesia. With its hues of orange, yellow and red, the zombie symbolises the incredible crimson sunset. In its flaming concoction, it resembles the fiery sun. And if zombie lovers are to be believed, a couple of these cocktails will readily transport you to the Polynesian panorama.

As to its recipe, zombie has changed its form and ingredients over the decades, personalised by mixologists to their own and their customer’s taste. But generally speaking, to make a zombie, one should mix dark rum, white rum, pineapple juice and lime juice in a cocktail shaker over ice. A slow pouring of grenadine gives the drink its incredible hue. A garnish of cherries and mint, and the zombie is ready. Are you?

Tracing The Origins Of Cream Rolls

Tracing The Origins Of Nutmeg: Here's What You Should Know

Tracing The Origins Of The Popular Burrito