Your Guide To Making Homemade Pasta Not only does homemade pasta taste better than the store-bought noodles, but it’s also very easy to make, and you probably already have the ingredients in your pantry. The following recipe is a heritage cooking recipe of interest. You can make pasta with the flour and eggs you have in your kitchen. With just a few ingredients, you can whip up fettuccine that’s silky smooth. Got some cheese or vegetables lying around? With just a few hours’ wait, you could be eating fresh ravioli, tortellini, or a hearty lasagna.

However, if you do a quick search for pasta recipes, chances are you’ll walk away more confused than confident. Many recipes call for flour and whole eggs, while others call for the addition of water or oil. It’s all over the map when it comes to weight versus volume measurements, kneading times, and resting conditions.

The majority of historians believe Marco Polo brought pasta back from China, despite some believing it originated in Italy. Originally, pasta was made with rice flour, and it was popular in the east.

The pasta was originally made from hard wheat and shaped into long strands, Italy-bringing it closer to modern spaghetti. Early Italian versions, however, were probably closer to vermicelli (a pasta name that translates as ‘little worms’)

But who invented pasta, and where did it originate? According to a common legend, Marco Polo brought pasta from China to Italy during his travels. The pasta was believed to have been in Italy long before Marco Polo travelled to China, although he may have given pasta its name. Pasta can also be found in the Etruscan civilization, the area that is now Tuscany, Umbria, and Lazio. In Etruscan tombs, archaeologists found cooking utensils similar to those used today to make pasta. 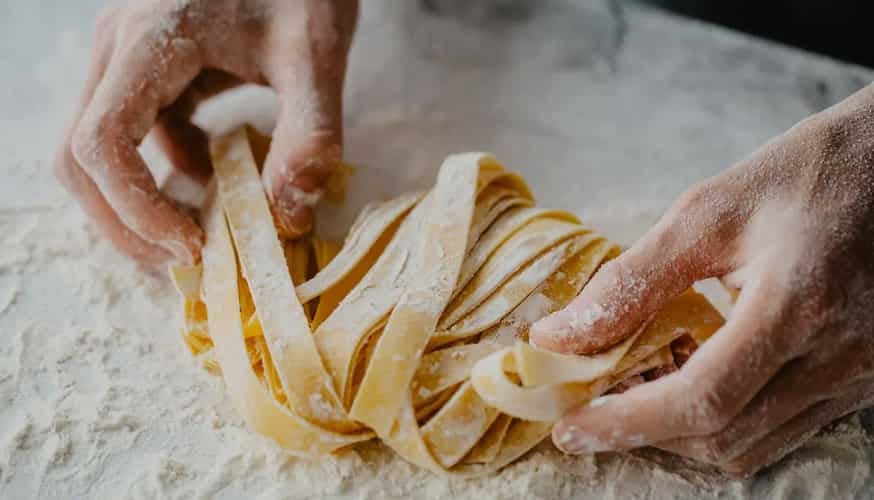 1. Mix the flour and salt together.

2. Add the eggs to the flour, and make a well in the centre.

3. Using one stroke at a time, begin to mix the eggs, adding flour as you go gently. You should eventually have a stiff dough.

4. Let it rest for a while before using it.

5. Adding a half teaspoon of water will help the dough stick together if it's too dry. If the dough is too sticky, add more flour.

6. Traditional bread dough is much stiffer than this dough. The longer you work it. However, the more smooth and pliable it will become.

7. As you knead, you will develop a smooth, satiny consistency.

8. After well-kneading the dough, cover it tightly with plastic wrap and allow it to rest for about 45 minutes. (This resting phase is crucial because it gives the dough time to relax. Otherwise, you'll be fighting it the whole time you're rolling it out.)

9. As soon as the dough has rested, divide it into four equal portions and roll it into a small circle. That's when the fun begins!

Rolling the dough into pasta:

1. For the best results, you must make several passes while rolling the dough at each thickness setting. It is usually run through once or twice on the biggest setting (usually 5 or 6), then gradually adjusted until it produces the perfect golden sheet.

2. It is then folded into thirds before going through again.

3. After every pass, the strip is folded into thirds again. This keeps things square and neat. Once it is rolled through the machine's cutting side, it can be cut into spaghetti or fettuccine.

1. You can use a rolling pin and knife (or pizza cutter) instead of a pasta machine if you don’t have one. Once you cook it, it will plump up considerably, so you need to roll it out as thin as you can.

2. Each portion of dough should be rolled out on a floured surface and then cut into thin strips. You’ll get rustic noodles, but they'll still taste great.

3. After this, you can either cook your pasta right away (3-4 minutes in salted boiling water) or dry it for later. With this drying rack, you can dry your pasta faster and more evenly.

4. If you freeze it in a big lump, you'll end up with a pasta dumpling when it comes time to cook it.

5. The perfect homemade pasta should be accompanied by a homemade sauce or olive oil, Parmesan, and fresh herbs.

Delving Into The Lesser-Known History Of Pasta

How About A Two-In-One Pizza Pasta Surprise For Your Child?

Have You Tasted These Delicious Bucatini Pasta Dishes?