The wood apple is an odd fruit with an exterior that resembles a rotted coconut and an interior that is unappealing. It also smells off; many describe it as having a mixture of the stench of overripe bananas and bad blue cheese. However, we are aware that it is best to not judge a fruit by its aroma, much as the stinky durian. The wood apple is a common fruit in Indian and Sri Lankan cuisine and is also found in the Andaman Islands and Bangladesh, which are nearby. The wood apple, also known as the elephant apple or limonia acidissima in botanical terms, is a fruit that matures to a size of 5 to 9 cm and is found on trees that can grow up to 9 meters in height.

This significant religious and medical tree is also known locally by the names Bael, Bel, Bilva, Sriphal, or Shivadruma (the tree of Shiva). It is also referred to as the wood apple, stone apple, Bengal quince, Indian quince, holy fruit, or golden apple. That is why it can be found in temples, and the trifoliate leaves are a required offering with prayer flowers from birth to death rites. Bael is seen as a fertility symbol as well. Bael is described in the Skandapurana as a tree that developed from Goddess Parvati's sweat drops that landed on Mandrachal mountain, the fictitious mountain that appeared after "Samudra Manthan." It is believed that Parvati, in all of her manifestations, resides in these trees, in the leaves, flowers, fruit, and roots. Because of this, the Bilva tree and its leaves are thought to hold a special place in Lord Shiva's heart.

The fruits, stalks, and leaves are used to treat a variety of illnesses.The tree's bark and roots also offer therapeutic qualities. The roots treat a variety of fevers as well as colitis, dysentery, diarrhoea, and other conditions. The leaves' astringent qualities make them effective expectorants for sore throats. Ayurveda refers to it as a healing plant because of its many therapeutic applications—a plant that strengthens and heals every organ in the body. Cracking up the tough, rigid surface uncovers a mushy, dark-brown flesh that resembles banana pudding. The exterior is covered with sticky brown pulp and tiny white seeds. 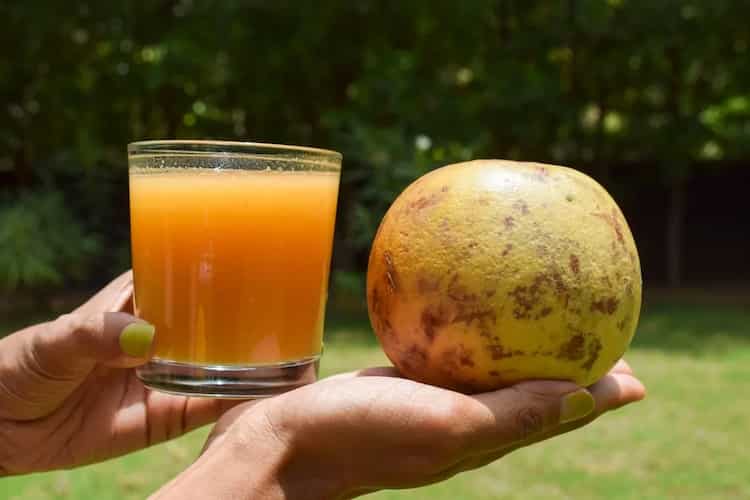 According to Charak Samhita (1500 BC), Bael has been loved and known about by Indians for a longer time than any other substance. The entire tree is so significant in both traditional Ayurvedic medicine and mythology. Wherever nothing else can grow, a Bael tree will, it is said. Many insects, including bees and wasps, are attracted to the blooms in April as they forage for food and contribute to the blooming process.

Research is now being done on this wild tree of the drylands. The 'Kaghzi' (with few seeds), 'Mitzapuri' (with thin rind), 'Darogaji', 'Ojha', 'Rampuri', and a 'Kaghzi' fruit tree were selected by researchers at the Horticultural Research Institute in Saharanpur (Uttar Pradesh, India) as being suitable for commercial cultivation.

Wood apple pulp has a sour, stinky flavour that pairs well with a little sweetness in desserts or, for savoury dishes, with toasty spices. In Sri Lanka, the strained pulp is combined with sugar and coconut milk to create wood apple juice. The resulting juice, which is tangy, sweet, and creamy, is a popular summertime street food alternative. Chutney and jam are also prepared from wood apple pulp by boiling it with sugar and aromatic spices like cardamom. Try its tart-sweet flavour in sweets like ice cream, or try it the way many locals do and eat it by scooping out the pudding-like pulp from the hard shell.

In the summer, roadside carts selling Bael juice can be seen on the streets of northern and central India. Jars of Bael "Murabba" decorate the walls of stores. The trifoliolate leaves are more expensive in the flower market in October as the holiday season gets underway. The stalks, both thin and thick, are utilised for "havan," an ancient religious ritual with fumigation as its primary therapeutic goal. To end the prayers, the Bael fruit is offered to the flames. As spring approaches, nature begins to blossom the trees, and the circle of life restarts. And so does the way that people engage with this tree, which provides so much for humankind.

Try bael or wood apple this summer for these 9 health benefits!