Why Were Pickled Eggs Served At Bars In The 1800s?

The pickled eggs that were popular bar snacks a few decades ago seem to have lost their prominence amidst other crispy and fried munchies. Usually, when you head to a bar, you’d order some peanuts and fried chicken to go with your booze. However, that wasn’t the case in the 17th century US and UK. Eggs were a huge deal in pubs and bars during that time. In fact, pickled eggs were the go-to bar snack in the late 1830s in England. For the unversed, pickled eggs were hard-boiled eggs that were peeled and dipped in a vinegar marinade, with salt and a few spices. These were paired with cocktails and other boozy drinks by the patrons and enjoyed to the core. While it is surprising to note that eggs, which are actually a breakfast item in many parts of the world, were served at bar tops along with G & Ts. 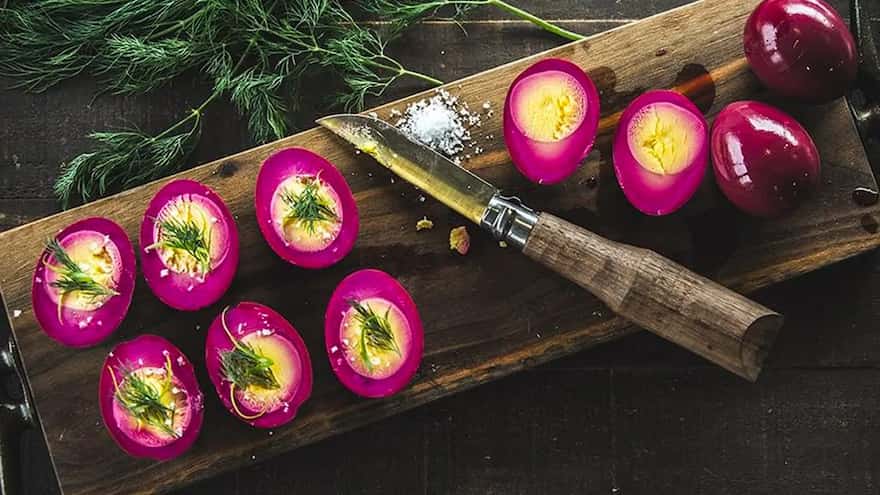 The idea of this kind of food pairing is believed to have been inspired by the French who had a surplus amount of eggs in their country and made it a practice to give away hard-boiled eggs for free. This started featuring in bars because of the regulation that bars should be serving food along with liquor. The interesting bit is that there is some scientific connection to this tradition too. It is believed that the an amino acid called cysteine present in the eggs, aids the functioning of the liver and works well to prevent excessive hangovers.

This is followed by the simple logic that when you’re munching on something while taking a drink, it helps to mellow down the effect of the booze. Consuming eggs at the side adds a certain nutritional value to your bar snacking. The pickled eggs were a feasible snack for the bars since they had longer shelf-life even without refrigeration for a few hours and were suitable for bar-like conditions. In fact, having eggs alongside drinks was also believed to induce customers to order more alcohol.

In England too, it is believed that the culture of pickled eggs was quite popular in the 1830s, served in what was called the Pickled Egg House. However, today, you’d find it hard to locate bars and pubs offers hard-boiled pickled eggs as snacks, except for one or two odd dive bars in the US.

Boti Ni Akuri For Breakfast: The Parsi Love For Eggs With A Meaty Touch

From Eggs To Oatmeal: 6 Breakfast Foods That Help With Weight Loss