Why Twinkle Khanna wants you to try tendli

Twinkle Khanna’s new book has recipes by celebrities like Katrina Kaif and Sonali Bendre. But the most interesting ideas are by home chefs One would think that movie stars would be above dabba envy but my partner once returned from a shoot with a grievous complaint. I was sending him chauli and tendli, while his co-star, a long-standing bachelor, was unpacking lunch boxes filled with prawns and lobster,” writes Twinkle Khanna in the foreword of her new book, What’s In Your Dabba?.

As a reader, it’s interesting to know that celebrities are just like everybody else, although lobsters in a lunch box is the kind of stuff superstar dabbas are made of. This essence of “keeping it real” holds the cookbook together. With easy and non-boring ideas for lunch and snacks, it has recipes from Khanna’s friends, who reveal the fuss-free food in their dabbas. Katrina Kaif is an idli-chutney girl, Bhumi Pednekar packs in a homely chicken curry and Akshay Kumar shares his take on avocado toast.

The surprise element and fascinating recipes in the book are not by A-listers but by bloggers and readers of Khanna’s digital publication Tweak India. There is food entrepreneur Rhea Mitra Dalal’s aamer luchi (mango puri), chefSucheta Sehgal’s black forest pudding and “mompreneur” Tarana Mav’s chocolate dhokla.

Earlier this year, perplexed by the question of how to keep the dabba menu interesting, Khanna launched a social media campaign with the hashtag #WhatsInYourDabba. She posted a recipe for beetroot tikkis on Tweak India’s Instagram page and tagged Akshay Kumar, Malaika Arora and Sonali Bendre, to share dabba food recipes; a classic case of crowdsourcing ideas on social media. It caught on, with people sharing recipes and tagging their friends. A quick search with this hashtag will reveal a few recipes, but to get to the gold (read, aamer luchi), the book is the best bet. It is the first book published under the Tweak Books imprint, in association with Juggernaut.

In an interview, Khanna reveals what qualifies as dabba food on days that don’t include tendli (ivy gourd) and how the recipes were shortlisted. Edited excerpts:

What would you consider as the opposite of ‘tendli’ for your partner’s lunch box?

Tendli just gets a bad rap. It’s pretty delicious. I would say it’s when I send him khow suey or bhutta curry. Our bhutta curry recipe is in the book. It’s a coconut-based dish with large pieces of corn on the cob.

What is the ultimate ‘dabba’ for you?

Like everyone else, I would have to confess that it’s what my mother sends me every once in a while. It’s a family speciality; a meat dish called kichdra. It has accompaniments like a chilli sauce, mint leaves, a lemon sauce, strands of fried onions in separate bowls and a special crisp roti.

What food did you discover while digging into your friends’ ‘dabbas’?

I tried most of them and now they are part of my meal plans. I have a big spreadsheet that I make, about two weeks’ worth of meals so that I am not hassled on a daily basis; from Sonali Bendre’s tweak to the traditional Maharashtrian sabudana khichdi by adding sweet potatoes, to Gauri Devidayal’s Udon noodles stir-fry, I have been busy adding them to my weekly menus.

What was the ‘dabba’ of your school days?

I studied in a boarding school, so we didn’t really have a dabba. Instead, we had packets of Maggi that we would put in a mug and leave in the sun so that it could supposedly “cook”. It was considered a great treat.

What is your signature ‘dabba’ for your children?

It would be pretty boring compared to what I believe other moms do. I usually put in a sandwich, sweet potato fries and a home-made muesli bar. There’s also a paratha or a thepla with vegetables mixed into the dough.

I am still a novice. I have never been particularly interested in food and can survive on eggs for weeks on end. Honestly, I don’t have a deep love for food that would reflect in my drummed-up dabbas.

How did you shortlist the recipes and people for this book?

It began as a social media challenge. Initially, the people who were giving us these recipes were my friends. Over time, as it went on, we got a bunch of chefs, nutritionists and Tweak readers who sent in their recipes. The criteria for recipe selection involved looking at parameters like nutrition, and each had to be fairly uncomplicated to recreate.

What do you pack in your ‘dabba’ in the following situations:

—Post a mean workout: A coffee and a muesli bar.

—After completing a book deadline: Chocolate, a gin and soda, a packet of soya chaklis, anything that can be called indulgent.

—On time-crunched mornings: A black coffee seems to be enough.

—When the cook is on leave: Scrambled eggs, cheese sandwiches and get the kids to cook. My son is an excellent young chef.

Sonali Bendre's sweet potato khichdi from the book 'What's In Your Dabba?'

A handful of finely chopped

Heat olive oil in a pan. Add the cumin and mustard seeds.

Once they begin to crackle, add the green chillies and curry leaves.

To this add the peanuts.

Next, add the sweet potatoes and salt to taste. Mix well.

Garnish with coconut and coriander and serve. 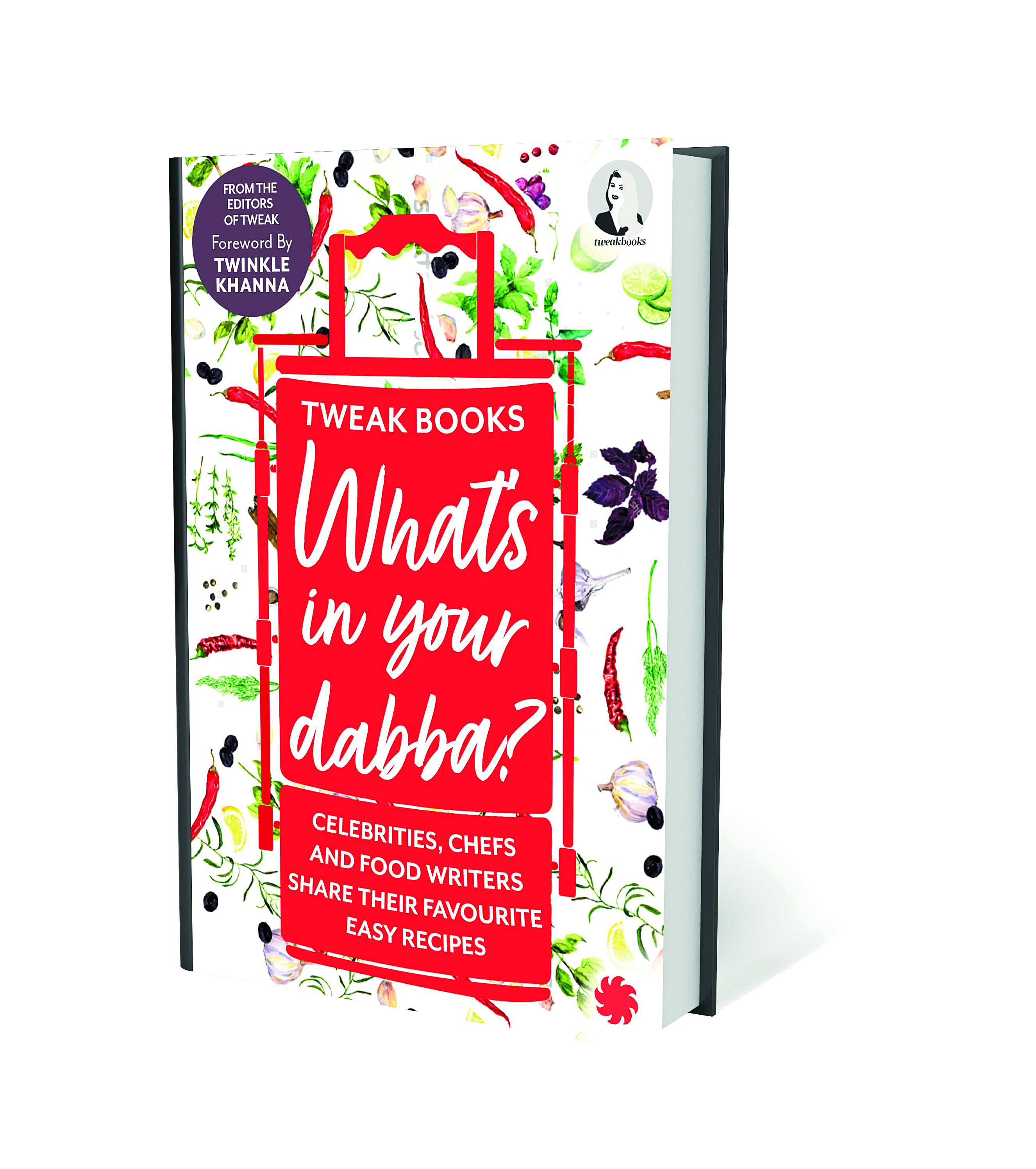