Who Were The First People To Use Spices?

Spices have been an important part of the human diet throughout history. Not many people know this, but spices were used extensively in the ancient world mainly because they had healing properties and could prevent food-borne diseases at an early stage. "Herbs are the friends of physicians and the praise of cooks." Charlemagne, Roman Emperor (742–814).

Herbs and spices have been used for their medicinal properties for centuries, and there is a wealth of anecdotal evidence to back up this claim. Early humans began coevolving with the world's flowering plants around 6 million years ago. The discovery that certain nuts, seeds, berries, and bark improved the flavor of the meat was likely made by accident by early hunters and gatherers who wrapped meat in bush leaves.

Spices have been an important part of the human diet throughout history. Not many people know this, but spices were used extensively in the ancient world mainly because they had healing properties and could prevent food-borne diseases at an early stage. Spices as we know them today first originated in India, Africa, China, and South America. They were initially used to hide off-putting flavors and odors in food and were later found to be effective preservatives. In ancient times, there was no separation between culinary spices and herbs and medicinal herbs. Flavoring agents such as leaves, seeds, roots, and gums that had a desirable aroma or flavor quickly rose to prominence and eventually became the norm in their respective cultures. Spices are very important for a number of reasons. First of all, they are rich in vitamins and minerals, which means they’re great for your health. Furthermore, the best spices are also rich in antioxidants, which can slow down the ageing process and boost your overall health. Most spices are also rich in anti-inflammatory compounds. Because of this, they can help reduce the risk of heart disease, asthma, arthritis, and even cancer.

The cultivation of spices began in the Middle East around 3000 BC. The first civilizations to use spices were the Indian, Egyptian, and Chinese. Spices were so important to the Chinese that they were used as payment for workers and rent. The Romans were also big fans of spices. In fact, they used them in almost every dish they prepared. Some of the most common spices they used were pepper, clove, coriander, cumin, fennel, and myrrh. When the Middle Ages came around, the West began to import spices from the East. They were mainly acquired through trade and, later, colonization, especially of India and Indonesia. Some of the most sought-after spices were black pepper, ginger, and nutmeg.

But Who Were The First People To Use Spices?

In Biblical Times: Religious offerings, burial rituals, medicines, trade, and seasoning were just some of the many ways in which spices were highly valued as early as the dawn of biblical times. The Bible contains numerous references to spices. Several spices, including cinnamon and saffron, are mentioned in the Song of Solomon. 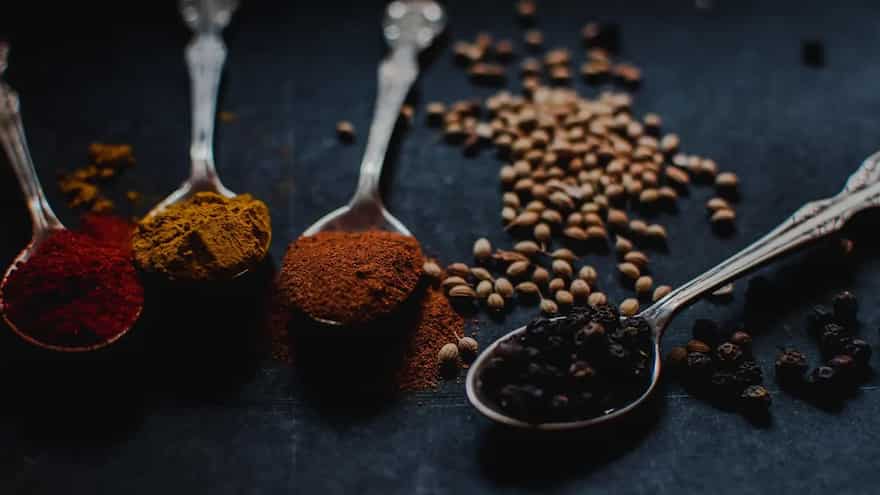 In ancient Egypt: The Ebers Papyrus (1500 BC), a compilation of ancient Egyptian medical knowledge, described remedies involving caraway, coriander, fennel, garlic, onion, peppermint, poppies, and onions. Garlic and onion played crucial roles. The people who built the Great Pyramid of Cheops ate onions and garlic to stay healthy and have more energy. Garlic cloves were also found in the tomb of King Tutankhamen.

In ancient China: More than a hundred medicinal plants, including the spice cassia, which is similar to cinnamon, were mentioned by Shen Nung in his 2700 BC work Pen Ts'ao Ching (The Classic Herbal). Pen Ts'ao Kang Mu (written by Li Shih Chen in 1596 B.C.E.) is a later and more comprehensive work on Chinese herbology.

In ancient Sumeria: Cuneiform tablets discovered in Iraq reveal that Mesopotamians in the Tigris and Euphrates river valleys, where a wide variety of aromatic plants thrived, used spices and herbs. In their clay medical texts from the third millennium BCE, the ancient Sumerians made references to thyme and other aromatic herbs.

In ancient India: Indians have been using spices and herbs like black pepper, cinnamon, turmeric, and cardamom for thousands of years. Gardens in ancient Babylon were already growing Indian spices like cardamom and turmeric by the eighth century BCE. Sushruta, a famous ancient surgeon from around the fourth century BCE, was known for putting sheets infused with white mustard and other aromatic plants on his patients' beds to ward off evil spirits. Poultices made of sesame, which he put on his wounds after surgery, have been suggested as a possible antiseptic.

In ancient Greece: Eastern spices (including pepper, cassia, cinnamon, and ginger) were brought to the Mediterranean by the ancient Greeks. Ancient Greek medicine relied heavily on spices and herbs. Hippocrates (460–377 BC) discussed a wide variety of herbs and spices in his writings. He stressed the significance of taking extra precautions when preparing medicinal herbs.

Spices have been an essential part of human medicine and diet throughout history, thanks to all the enormous benefits they bring to the table (pun intended)!

6 Winter Spices To Keep You Warm And Protected

Ginger: How One Of India’s Favorite Spices Came From China