Who Are The East Indians of Mumbai and What Do They Eat?

The community started to call themselves the Original East Indians, named after the East India Company, to identify themselves as the original inhabitants of Bombay East Indians are the original inhabitants of Bombay, Thana and Salsette islands. The origins of this small but vibrant food-loving community date back to the 15th and 16th century, when Portuguese missionaries converted people from the local farming, fishing and salt-making communities to Roman Catholicism. An intriguing question often asked is, ‘Why is this community located on the West of India, but called East Indians?.’ The  answer to this lies in the East India Company. The community started to call themselves the Original East Indians, named after the East India Company, to identify themselves as the original inhabitants of Bombay. This also helped differentiate them from other Christian migrants.

East Indians are proud of their unique culture and heritage. Maria, an East Indian settled in Pune, enjoys celebrating the East Indian tradition through recipes and customs passed down the generations. “We love our style, our unique way of living, our culinary traditions”, says Charmaine, a proud East Indian resident of Bandra.

On the East Indian table

While the cuisines of the Goans and East Indians have been heavily influenced by the Portuguese, unlike Goan cuisine, East Indian cuisine is not coconut heavy. “I had a mother in law who was East Indian and I had to make her happy” says Charmaine. “I was always interested in food from a young age and growing up, I picked up recipes from my grandmothers and aunts, who I shared a very close bond with”, she adds.

Being fish eaters, a fish curry with dried mango features prominently on the everyday menu at East Indian homes. Kardi aamba (the word kardi means prawns) made of fresh mango and tiny shrimps is also daily comfort food. While vegetable dishes such as cabbage foogath may be made with coconut, the curries, especially prawn curries, are not coconut heavy. Varan (a dish made of broad beans, drumstick and baby onions) khuddi curry (a meat curry made with East Indian bottle masala and potatoes) usals (a range of lentils cooked with bottle masala) are dishes you would regularly see on the table. “Lonvas (a mutton and pumpkin curry) is a regular family favourite while tope is a dish we especially enjoy on picnic days; it’s a preparation of mutton with poha ” says Simone, a devout Goan Christian resident of Kurla who has been married into an East Indian family for 34 years and knows East Indian recipes like the back of her hand. Bottle masala, the pride of every East Indian home, gives most dishes their unique flavour and home cooks swear by it. The masala, intriguingly stored in long stemmed beer bottles to maintain its freshness, remains a well guarded family secret of every East Indian family. While the internet has made this elusive recipe more accessible, we dare you to wrangle the ‘authentic’ recipe out of an East Indian auntie!

Like most coastal communities, the East Indians too, stock up on dried fish in the months leading up to the monsoons. A dried Bombay duck chutney eaten with a roti made of rice flour is an East Indian speciality. It ensures that the fish lovers don’t have to miss out on seafood during periods of scarce seafood supply.

Weddings, feasts, funerals and food at the heart of it all

“Our weddings are so lovely; they go on for a full seven days”, says Charmaine, a hint of nostalgia in her voice as she recounts the “grand style” with which weddings used to be celebrated, in days gone by. A day before the wedding is the umbracha paani, an important pre-wedding ritual for East Indians. Coloured rice papris are deep fried and served as a crunchy snack as the wedding party goes to the neighbourhood well and collects water that the bride will bathe with the night before her wedding. The evening ends with a hearty dinner, a delicious spread of festive fare commonly featuring spare parts of pork, other gravy dishes and  the much prized wedding pickle, a traditional papaya and carrot pickle with vinegar. 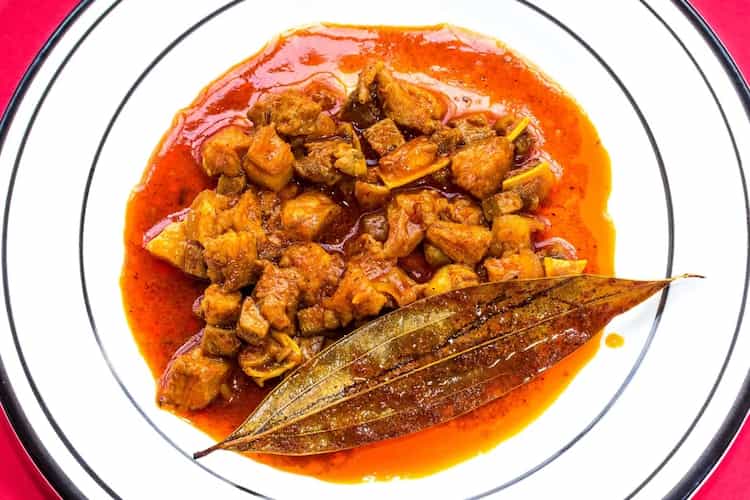 Wedding food is an extravaganza of flavours and brings together the best of East Indian cuisine. From variyas (a type of deep fried wedding bread made with urad dal, rice and all purpose flour) to fugiyas (crisp-soft deep fried sweetish bread balls), khuddi (a chicken or mutton curry with potatoes, bottle masala and tamarind), vindaloo to sorpotel, and pork temperad. While tourism might have contributed to the popularity of the red tangy Goan sorpotel, the East Indian variety is quite different. East Indian sorpotel is brown, semi-dry and uses the famous Bottle masala for spice and flavour.

Wedding rice or Arroz Fugath is a signature dish and one that will immediately put a smile on the face of any East Indian. It's an aromatic pulao made with long grain rice, spices bloomed in ghee and generous amounts of nuts and raisins. Though flavourful on its own, it's the perfect accompaniment with the rich, hearty curries of festive occasions.

If by some stroke of ill luck, the quality of food does not pass the taste test of the guests’ discerning taste buds, only the Good Lord can help you. Tongues will be wagging long after the wedding is over, as aunties discuss the meat to fat ratio of the vindaloo, the missing ingredients in the roast, or how the sorpotel ran out before guests could get a second serve. All of this wonderful food is chased down with extra large pegs of the best whisky the bride’s father can afford.

Funerals on the other hand are solemn occasions. Simple food is prepared and brought over by relatives and friends for the grieving family. The East Indians have a rather quaint custom that is followed a month after the death of the person, when a month's mind mass is offered. This is a spiritual service to honour the departed soul. In remembrance, the family gets together to cook and enjoy all the favourite foods of the person they have lost. Each year, the second of November is commemorated as All Souls Day, a day of prayer and remembrance of dearly departed members of the family. On this day, East Indians make a dish called Atola. It is a type of rice pudding made with newly harvested rice, black-eyed beans, coconut, and jaggery and is offered as a tribute to their ancestors.

Come winter and especially  around Christmas season, along with the festive fare you will find a special drink called Kimaad making an appearance. As travel blogger and foodie, Abby from Winged Fork eloquently says “The traditional East Indian wine makes its entrance at celebrations before any other drink does. No celebration and no party can start without the ceremonial toast with this sweet port-like wine”. The drink is served up at the most important milestones and celebrations in an East Indians life - from christenings to communions, weddings and more. Served in chownis or traditional East Indian wine glasses, East Indians then cheer “Sukhala”, a wish for each others good health and wellbeing.

Kimad Drink: How To Make This Traditional Wine In Three Simple Steps