What’s Cooking In Saif Ali Khan’s Kitchen In The UK? While several actors seem to be off on a Euro trip currently, one of them is Saif Ali Khan. The actor, along with his wife, Kareena Kapoor, and sons, Taimur and Jehangir, have been vacationing in the UK for quite some time now. While we get to see their cute pictures frequently, it was Saif’s recent stint in the kitchen that took the internet by storm. While everyone has seen the actor performing the character of a chef in reel life, the reality hit very differently.

It is hard to picture an actor belonging to the royal Pataudi family entering the kitchen for something other than eating. However, with Saif, it’s a totally different case. The foodie actor revealed his chef side recently and has become the talk of the town. On his UK vacation, he invited several friends over for a Sunday meal and prepared the food himself. What makes us so sure? Well, their friend, Alexandra, shares tidbits of the day on her Instagram feed and we stopped at the one where Saif was in the kitchen. 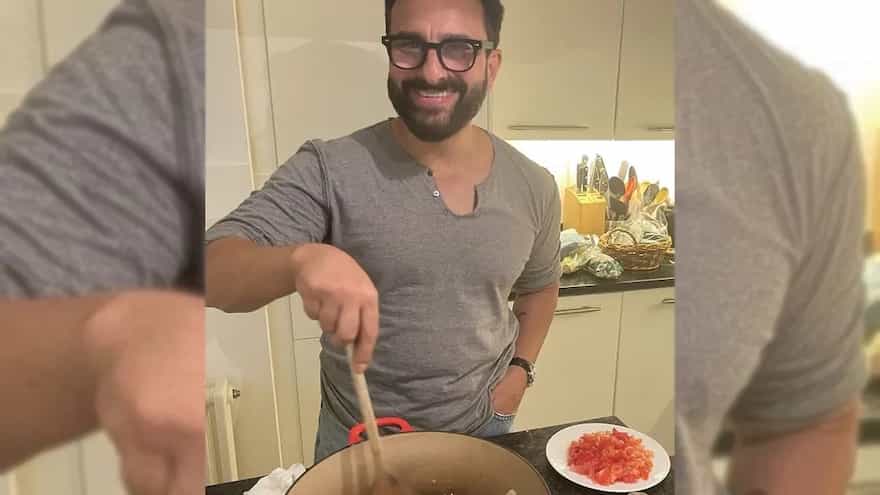 A very warm and pleasant get-together at Saif’s UK residence was adorned by his great cooking skills. In the picture, Saif is seen sautéing onions in a pan while some chopped tomatoes are kept on the side, ready to be added in. The actor poses for the camera as he holds the spatula in one hand and smiles. The post was captioned as, “The perfect Sunday with Chef Ali Khan cooking up a storm in the kitchen for us. Delicious!!”. This made us even more inquisitive about what the actor was cooking for his friends.

While this is probably the first time off-screen that Saif has adorned the chef hat in real life, his foodie instincts are very well-known to his followers. The ardent fan of Chinese food, both Saif and Kareena love to order takeout from a place in Khar, which offers some delectable Indianised Chinese food. However, he grabs the chef hat once in a while to cook Kareena’s favourite spaghetti, as per an interview with a media publication.

This Cooking Channel Has Impressed Everyone, Even Rahul Gandhi! Seen It Yet?