What Makes Madagascar The Vanilla Capital Of The World Just imagine what the air smells like there. Although it’s Mexico that vanilla beans trace its roots to, 80% of this fragrant spice is grown in Madagascar today. Vanilla orchids are widely cultivated in the island country, located off the coast of East Africa. The region’s humid subtropical climate aids growth and quality of vanilla beans there, so much so that the yields are considered ‘gold standard’ in the global spice market. Around 25,000 hectares of land in Madagascar is dedicated to vanilla cultivation, engaging as many as 80,000 farmers. The majority of the world’s finest beans come from the northeastern Sava region. You’ll find Madagascan vanilla mainly in the chocolates, cakes and ice creams sold to consumers across the globe.

Be it vanilla-flavoured ice cream or essential oil, who isn’t smitten by its delicate flavour. No wonder, one kilogram of plain vanilla now holds more value than one kilogram of silver. The process of cultivating and curing quality vanilla beans is done by hand. And over the centuries, the local people of Madagascar seem to have perfected this labour-intensive art. Owing to the amount of effort that goes into the production of vanilla, it is the second most expensive spice in the world, the first being saffron. According to spice expert Alex Wilkens, “It’s far and away the most complex spice flavour on earth, which makes it almost impossible to describe. This is also exactly what makes a high-quality vanilla bean so special. Floral, sweet, earthy, undertones of dried dark fruits, oak, and leather all at the same time.” 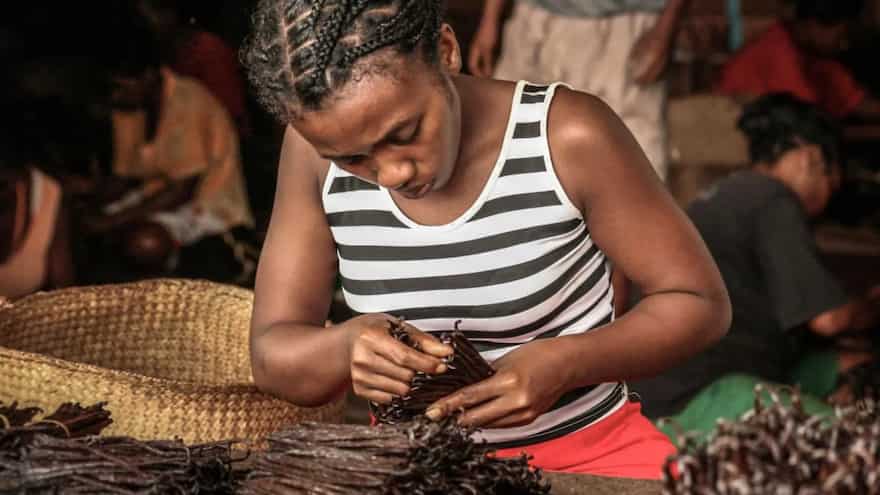 Vanilla is an indispensable part of the food industry. An incredible flavouring agent, vanilla is used in cakes, ice creams, custards, teas, coffees, and a host of other baked treats, desserts and beverages. Sometimes, vanilla is also used in certain savoury items - such as sauces and scrambled eggs. The Madagascar bourbon vanilla has a reputation of its own. Regarded as the perfect all-purpose vanilla, this variety is said to render a special flavour and consistency in whatever it’s added. Chefs around the world have hailed this vanilla extract for its versatility, making it suitable for a wide range of recipes. Apart from baking and cooking purposes, vanilla essence is a treasured ingredient in perfume production and aromatherapy.

The primary source of vanilla is the vanilla planifolia orchid. The presence of an organic compound, called vanillin, is the secret behind the spice’s signature flavours - sweet, warm, and creamy. Meanwhile, spicy, floral, and fruity flavours come from the 250 other compounds present in the beans. The vanilla beans grown in Madagascar have a higher concentration of vanillin, in comparison with those grown in other countries. Two-thirds of the world’s vanilla supply is covered by Madagascar and Indonesia, followed by China and Mexico. In recent years, however, Madagascar’s vanilla production has fallen victim to the effects of climate change. Drought and cyclones have hit the farmers hard, which, in turn, have impacted the supply chains of global brands, resulting in high demand and soaring prices. That aside, the island nation’s multi-million dollar vanilla industry has also time and again come under the radar for exploitation, poverty and child labour. Several reports have sounded the alarm on the desperate plight of the impoverished farmers and other people involved in vanilla cultivation in Madagascar.

Vanilla Extract Vs Essence: What’s The Difference Between These Baking Ingredients

5 Yummy Ways You Can Use Your Classic Vanilla Ice Cream