Siddhant Chaturvedi confessed that he doesn’t believe that the street food in India is junk as he likes pani puri, sev puri, dosa, etc. apart from the Indian cuisine and what his mom cooks. Come festivities and food takes the centre stage in most homes and it’s amazing to see how each festival has a food that connects with it. So when we think Holi, gujiya, jalebi, dahi bhalla and more. The tastebuds are almost incomplete without Gujiya and keeping up with the tradition, Gehraiyaan actor Siddhant Chaturvedi took to Instagram and posted a video saying “Maa ke haath ki Gujiya waali Happy Holi sabko! 😋 🌈” where his mom was seen making some delicious homemade gujiya. In the video one can see her stuffing them and frying them. Two full plates were loaded with home made gujiya to which many commented saying.

“My mom is making gujhiya too!😍 Happy holi”

Siddhant who is a health freak has always vouched for home-made food that he gorges on. He also claimed that he was never been a fan of junk food. While interestingly he also adds that in an interview while ago that he doesn’t believe that the street food in India is junk as he likes pani puri, sev puri, dosa, etc. apart from the Indian cuisine and what his mom cooks. He chooses to keep it basic and simple. 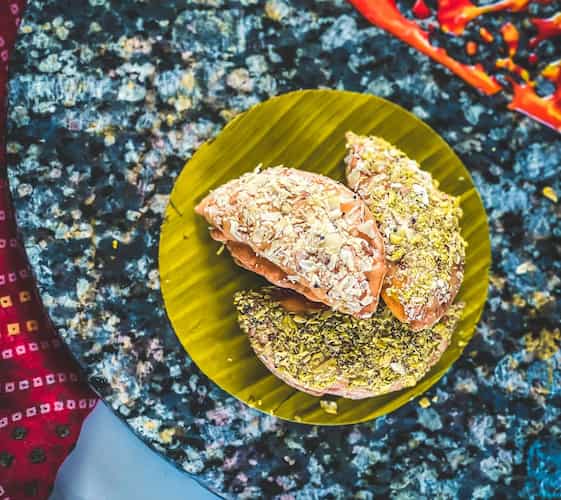 Whatever the case no one can keep themselves away from gujiyas the moment we think Holi. This crescent shaped sweet or a look alike of empanada sees a stuffing of coconut or mawa or any other variations that one can see today, first sees it’s mention of gujiya in the way back in the 13th century, when a jaggery and honey mix was covered with wheat flour and then was sun-dried.

The preparation is similar to that of samosa as it also sees a stuffing inside but with time the stuffing has seen a lot of innovation flavours. The stuffing of gujiya or pedakiya is also loaded with dry fruits like cashew, resins, walnuts, almonds and more. Mostly eaten during Teej, Holi and Chhath, the dry ones are called Pedakiya in Bihar and is offered during Chhath. There are two varieties of it one suji / rawa (Semolina) and the with khoa. Also called also called Ghughra in Gujarat  Karanji in Maharashtra and in Odisha, Somas  in Tamil Nadu, Garijalu in Telangana and, Kajjikayalu in Andhra Pradesh and, Karjikayi or Karigadubu in Karnataka, whatever the name this sweet happens to be an all time festive special, bringing smiles.

Holi 2022: Celebrate The Festival With Some Gulkand Gujiya or Dahi Gujiya

Holi 2022- How About Some Vegan Rasmalai Or Mascarpone, Rose Petal and Honey Bundt Cake