Murshidabadi cuisine sees a long line of lineage as one of the oldest cuisines of India. This lesser-known cuisine from Bengal, is a great example of how the Persian culture married with the local flavours to give rise to something absolutely new and delectable. Murshidabad, this City of Nawabs”  was once the erstwhile capital of Bengal. Named after Nawab Murshid Quli Khan, who happened to be the Dewan of Bengal, Bihar and Orissa, the city now is well pretty known for its Murshidabadi silk weaves. With all its heritage buildings still standing tall, the cuisine of this place is equally rich in history. Murshidabadi cuisine sees a long line of lineage as one of the oldest cuisines of India. This lesser-known cuisine from Bengal, Murshidabadi cuisine is a great example of how the Persian culture married with the local flavours to give rise to something absolutely new and delectable. Also given the fact that Bengal was rich in fish dishes like Mahi pulao made it’s presence as it was difficult to imagine a feast without fish in Bengal, therefore the Nawabs were more than happy to indulge in the local and juicy fish produce.

So, if you are visiting this heritage town of Murshidabad, don’t forget to indulge in some gluttony experiences at these places. 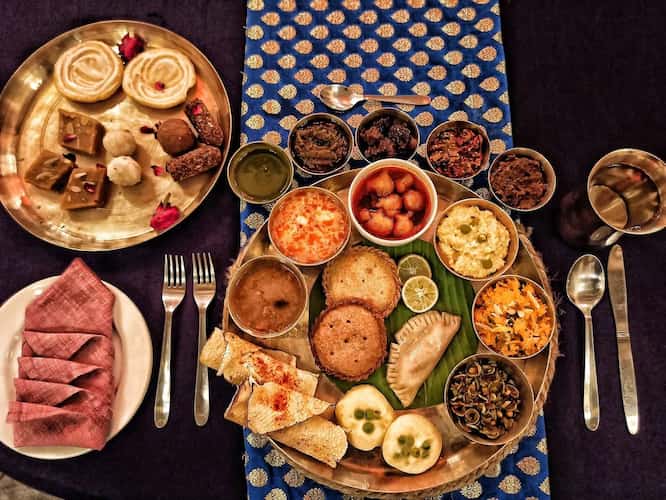 Built in the built in the late 1700s, the name of this place Bari Kothi  that literally translates to Palace of the Elder), was coined in the late 1800s as the  house of the elder (bari) brother, Rai Bahadur Budh Sing Dudhoria. This place or bari holds much significance as one of the heritage houses in the city which sees glimpses of Greek, Roman and French architecture. And here they are known to serve the Sheherwali Cuisine – a cuisine that sees 300 year old culinary tradition of Murshidabad. “Sheherwali” which means city dweller was coined after a community of businessman who were from Rajasthan and had migrated to the Murshidabad. They settled in the twin cities of Azimganj-Jiaganj and they had a distinct identity of themselves.

The Sheherwali Cuisine came into existence as the Oswal Jains settled, and found the  abundance seasonal fruits, fresh vegetables and fresh water. And with time their cuisine was adapted and evolved with the use of fresh and seasonal produce like vegetables and lentils available locally. Their flavours got mixed with the flavors of the Afghans and Mughals and of course Bengal. As the Sheherwali Cuisine uses mustard seeds and mustard oil and Pnach Phoron spice. The Mughals influence was seen in the use of cashew nuts, poppy seeds, other dry fruits, saffron, rose water and more.

So this vegetarian cuisine is a fine example of confluence of culture but it has made sure that it strictly retains the essence of Jain cuisine and hence till date refrains from using onions, garlic and root vegetables in the food. The food is rich in ghee and sees bold use of spices, similar to one you still in Rajasthan. The dinner experience at Bari Kothi is an elaborate affair where you get to taste the actual Sheherwali cuisine. The food comes in different courses. It’s 5-course dinner and each course had different preparations. From Dal ka paani to mathri, to kutti Mirchi ka achar to Kache Kela ka Tikki to Moong Dal Chilla to Milao ka Sabzi and Gatte ka Pulao the whole spread is pretty elaborate. You end the meal with some Murshidabad Chena Boda.

Cossimbazar Palace Of The Roys ( Rajbari) 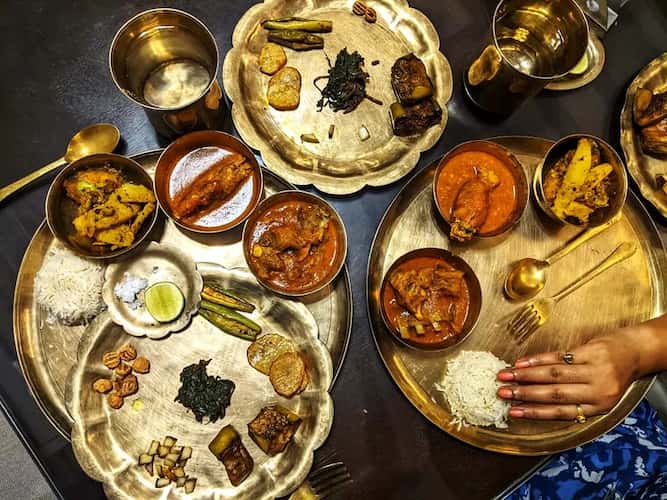 Cossimbazar at one point of time happened to be one of the most flourishing port in the country hence it does see a lot of Dutch, Armenian, English influence. Cossimbazar Palace Of The Roys ( Rajbari) is a fine majestic example of Victorian style of Architecture. Currently run and maintained by the 10th generation Mr Pallab Roy, the house sees high ceilings and the ornate chandeliers that add to those Victorian charm. From Burmese teak, sofas belonging from the British era, to tables with marble top sourced from Italy, Belgian glass mirrors, vases of different shapes and sizes after the charm and richness of the Rajbari. Interestingly the The Roys, who were once Muslin traders.